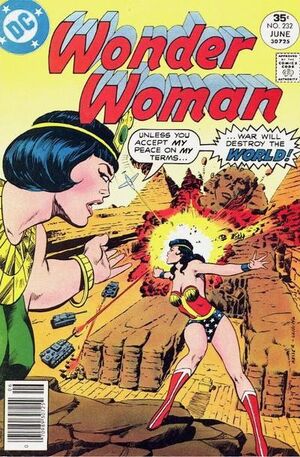 Appearing in "A Duel of Gods"Edit

Synopsis for "A Duel of Gods"Edit

Osira, an Egyptian from another dimension, unleashes the imprisoned Justice Society of America from their glass pyramids and has them attack Wonder Woman. With the help of Thunderbolt, Starman is knocked out. Wonder Woman then takes the Gravity Rod and blasts Osira. Weary and weeping, Osira listens to WW's words of wisdom and love. The two foe's shake hands and Osira disintegrates, vanishing into the void of eternity. Everything returns to normal. Steve Trevor is no longer hypnotized, the JSA head back to their headquarters and the war continues on.

Retrieved from "https://heykidscomics.fandom.com/wiki/Wonder_Woman_Vol_1_232?oldid=1517414"
Community content is available under CC-BY-SA unless otherwise noted.