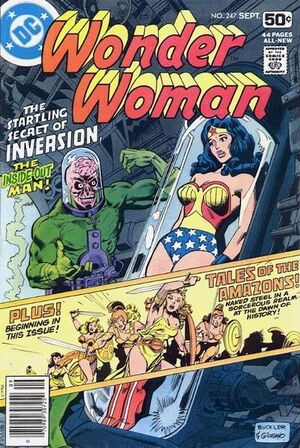 Appearing in "The Inside-Out Man"Edit

Synopsis for "The Inside-Out Man"Edit

Wonder Woman fights Inversion, a scientist who accidentally turned himself inside-out during a teleportation experiment...and now wants to do the same to everyone on Earth.

Lt. Truman, suspecting they are the same man, tries to find the link between Steve Howard and Steve Trevor by kidnapping Steve Howard!

Hippolyte and the Amazons reclaim Aphrodite’s girdle from Hercules and break free of slavery, but not before Hercules kills an Amazon named Diana. After a battle at sea against a giant squid, the Amazons are sent to another universe by a sea serpent who serves Aphrodite.

Retrieved from "https://heykidscomics.fandom.com/wiki/Wonder_Woman_Vol_1_247?oldid=1468603"
Community content is available under CC-BY-SA unless otherwise noted.