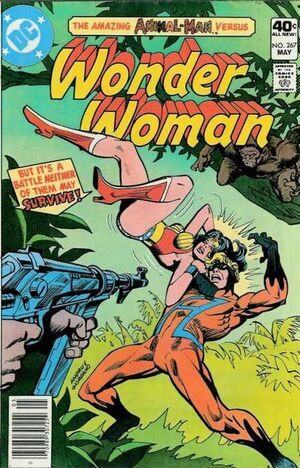 Appearing in "The Man Who Walked with Beasts"Edit

Synopsis for "The Man Who Walked with Beasts"Edit

Wonder Woman goes to a Citadel enclave hidden in an artificial “veldt” stocked with animals in the California desert. There she meets and briefly battles with Animal-Man, a hero with animal powers. They straighten things out and Animal-Man tells her he put his crime-fighting career on hiatus after a few cases, until recently, when the Cartel killed a movie producer and a friend of his was charged with the murder. Wonder Woman and Animal-Man fight their way into the Cartel hideout and discover an electronic map with another Cartel power base identified in France.

Retrieved from "https://heykidscomics.fandom.com/wiki/Wonder_Woman_Vol_1_267?oldid=1468644"
Community content is available under CC-BY-SA unless otherwise noted.