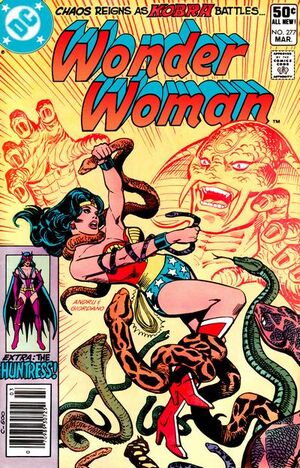 Appearing in "The Kobra Ultimatum"Edit

Synopsis for "The Kobra Ultimatum"Edit

When Wonder Woman tries to interrogate the Kobra Cultists using her magic lasso, they literally explode due to a post-hypnotic command. Kobra preempts all worldwide television broadcasts to issue an ultimatum, demanding one-half the world’s gross national product in precious metals upon pain of his unleashing the Cobalt 93 bomb in the Middle East. Diana Prince consults Mother Juju, a mystic, about the Kobra Cult and learns they date back 100 years, to anti-British fakirs in India. Wonder Woman travels to India and uses her magic lasso to force a fakir to reveal Kobra’s hiding place, in an old temple of Kali. Once inside, she falls through a trap door and finds herself confronted by Kobra and a pack of real king cobras.

Huntress worries about her secret identity being discovered by Harry Sims. She heads to Helena's office to find her assitant, Carole, in trouble from her ex-husband Joe. Huntress easily takes care of Joe, whom runs off, and then listens to Carole's story. After the story, Huntress decides she better go get Joe and drag him back to Carole, so she can turn him in to the D.A. on blackmail charges.