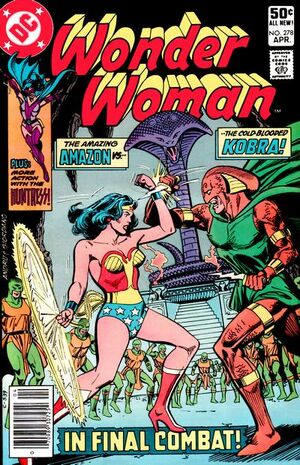 Appearing in "The Serpent and the Amazon"Edit

Synopsis for "The Serpent and the Amazon"Edit

Wonder Woman is trapped inside the temple of Kobra in New Delhi. Kobra stands mockingly over her, before casting her into a deep pit filled with deadly cobras. She easily leaps out of the pit only to discover that the man, who had been mocking her, was in fact merely a decoy. The true Kobra arrives and unleashes a giant king cobra against her. Wonder Woman battles the creature, and learns that it is actually a robot. While Diana smashes the robot into oblivion, Kobra succeeds in escaping. Wonder Woman explores the temple and comes upon an altar room. Studying the room at length, she races back to Washington DC. She now knows where Kobra's next target will be.

In Washington, Diana Prince consults with Steve Trevor. They learn that Kobra is in possession of a deadly isotope called Cobalt-93. He will use the Cobalt for a special "dirty bomb", which he will launch unless the world leaders agree to pay him one-half of the international gross product in precious metals. Steve realizes that this will utterly destroy the world economy, which is exactly what Kobra wants.

Trevor leaves for Cairo in the hopes of intercepting Korbra's missile before it is launched. Diana changes into Wonder Woman and follows after him in her invisible plane. Steve arrives at the Pyramid of Cheops, where he meets an Egyptian soldier named Muhammad Sufari. They enter the pyramid and discover the missile. Steve sneaks into the cone and attempts to sabotage the missile's guidance systems.

Wonder Woman meanwhile, arrives soon after and attacks Kobra's forces at the base of the pyramid. She is too late however, as Kobra launches the missile with Steve still inside. Trevor succeeds in sabotaging the missile and it splashes harmlessly into the Suez Canal. Kobra manages to escape, but brings down the entire pyramid in the process.

Appearing in "The Lion Roars at Midnight"Edit

Synopsis for "The Lion Roars at Midnight"Edit

The Huntress goes to the Gull Island Federal Penitentiary off Gotham Bay. There, she finds district attorney, Harry Sims, sitting in the shadows. Sims is distraught over the fact that he succeeded in discovering the Huntress's secret identity. Having worked closely with the Huntress in both of her guises, Harry finds it difficult to accept the fact that she constantly places her life in danger.

After talking for some time, the Huntress leaves the room. As she enters the outside grounds of the prison, a loud explosion sends her flying. Huntress slams into the ground and falls unconscious.

A convict named Lionmane storms the warden's office and holds him hostage. Harry learns what is going on, and races outside to rouse the Huntress. He eventually wakens her and explains the situation. The Huntress knocks Harry out with a tranquilizer dart, then proceeds to re-enter the prison to take down Lionmane.

Retrieved from "https://heykidscomics.fandom.com/wiki/Wonder_Woman_Vol_1_278?oldid=1724034"
Community content is available under CC-BY-SA unless otherwise noted.