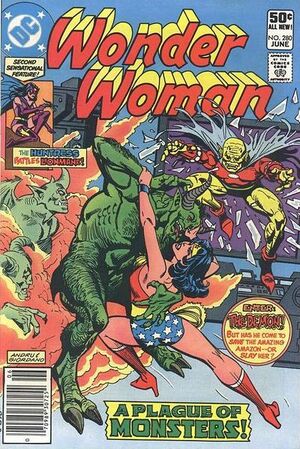 Appearing in "In the Claws of Demons"Edit

Synopsis for "In the Claws of Demons"Edit

Wonder Woman tries and fails to save Etta Candy from the demon Baal-Satyr. It knocks her unconscious and vanishes from the mortal plane with Etta in hand. After Wonder Woman awakens, she becomes Diana Prince again and goes with Steve Trevor to investigate the Delphi Foundation, ostensibly run by the wheelchair-bound Oscar Pound. Pound denies involvement with Etta’s disappearance. But later, he is visited by Klarion the Witch-Boy, who has given him back the use of his legs with witchcraft in return for the backing of his foundation. Wonder Woman goes to consult with Mother Juju, who tells her about Jason Blood. The Amazon visits Blood and his partner Randu, and speaks the incantation that allows Etrigan the Demon to take over Blood’s body. The Demon agrees to help her find Baal-Satyr, and they leave the mortal plane.

Appearing in "Lion at Bay"Edit

Synopsis for "Lion at Bay"Edit

Retrieved from "https://heykidscomics.fandom.com/wiki/Wonder_Woman_Vol_1_280?oldid=1724032"
Community content is available under CC-BY-SA unless otherwise noted.