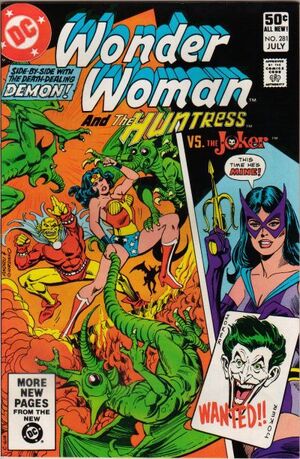 Appearing in "The Castle Outside Time!"Edit

Synopsis for "The Castle Outside Time!"Edit

The Demon leads Wonder Woman on a quest through a netherworld until both of them reach Baal-Satyr’s castle in time to stop the villain from throwing Etta into a cauldron. The two heroes destroy Baal-Satyr. But, on Earth, Klarion has knocked Randu Singh briefly unconscious, severing Etrigan’s link with that world, and Wonder Woman fears that she, the Demon, and Etta are trapped in the netherworld. Meanwhile, a transforming Oscar Pound learns that his bargain with Klarion has some strings attached.

Retrieved from "https://heykidscomics.fandom.com/wiki/Wonder_Woman_Vol_1_281?oldid=1724036"
Community content is available under CC-BY-SA unless otherwise noted.