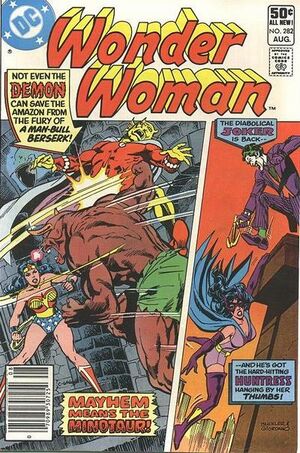 Appearing in "Return to Redemption"Edit

Synopsis for "Return to Redemption"Edit

Randu Singh performs an incantation that brings Wonder Woman, Etta Candy, and the Demon back from the netherworld. The threesome materialize in Diana Prince’s apartment, where they meet Steve Trevor, who is investigating Etta’s disappearance. Etrigan vanishes, later reuniting with Randu and Glenda and resuming his Jason Blood form. Diana Prince learns that Sen. Abernathy was responsible for giving Oscar Pound access to Etta, when he caved in to pressure from the Delphi Foundation. Still later, Wonder Woman fights Oscar Pound, who has been transformed into a minotaur, defeats him, and comes upon the battle between the Demon and Klarion. Klarion vanishes, leaving only a charred spot, but Etrigan confirms that neither he nor Klarion can be killed, and becomes Jason Blood again. With Klarion’s defeat, Oscar Pound becomes human again, and finds he is once again a cripple.