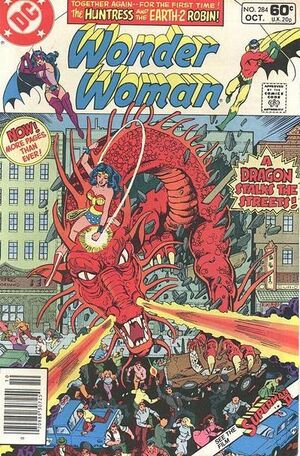 Appearing in "Shadow of the Dragon"Edit

Synopsis for "Shadow of the Dragon"Edit

Wonder Woman fights and destroys the dragon, which turns out to be a robot. She, Steve Trevor, and Lao Chen investigate the site and find more weapons stolen from U.S. sources, including a crate that held a new cruise missile. Lao Chen invites Steve and Diana Prince (who has secretly switched identities) to China to help them find the missile and capture the Red Dragon. While Diana, Chen, and Trevor are in China, they are rendered unconscious by a sleep-gas bomb hurled by one of the Dragon’s agents,who secretly places a “control crystal” on Steve. Sometime after they awaken, the Red Dragon launches the cruise missile, which is able to evade all known aircraft, at Peiping. Steve Trevor holds a device which can control or abort the missile, but the Dragon exerts control over him and has him destroy the missile control.

Appearing in "Together Again -- For The First Time!"Edit

Synopsis for "Together Again -- For The First Time!"Edit

Retrieved from "https://heykidscomics.fandom.com/wiki/Wonder_Woman_Vol_1_284?oldid=1724039"
Community content is available under CC-BY-SA unless otherwise noted.