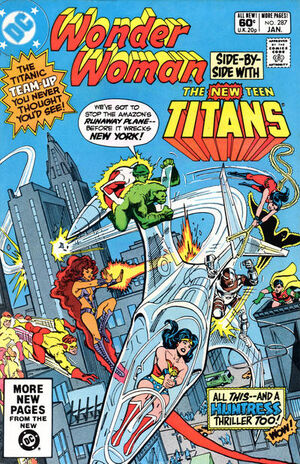 Appearing in "Eye of the Beholder!"Edit

Synopsis for "Eye of the Beholder!"Edit

Wonder Girl and Starfire of the New Teen Titans respond to a mysterious summons to a New York harbor dock and are attacked by costumed crooks, who manage to capture Wonder Girl. Starfire captures one of the gang, learns that her prisoner is a woman, and contacts Robin, who in turn phones Diana Prince and enlists Wonder Woman’s aid. Wonder Girl is held prisoner by Dr. Cyber in a gas-filled chamber, and Cyber lures Wonder Woman to her hideout, intent on having her aide Dr. Moon transplant her brain into Wonder Woman’s body. Rather than risk her adopted sister’s life, Wonder Woman appears to agree to Cyber’s terms. But the rest of the New Teen Titans burst in and give battle. Wonder Woman defeats Cyber, and Wonder Girl breaks herself out of the glass prison she had been held in.

Retrieved from "https://heykidscomics.fandom.com/wiki/Wonder_Woman_Vol_1_287?oldid=1673222"
Community content is available under CC-BY-SA unless otherwise noted.