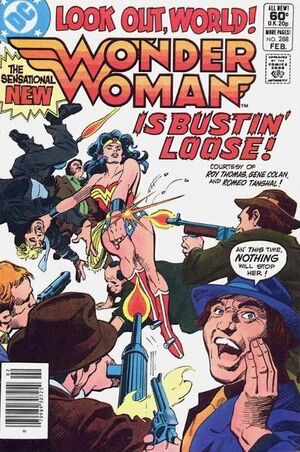 Wonder Woman checks up on Steve Trevor at the hospital and learns from Dr. Prescott, who is in charge of him, that Steve is not endangered by his head wound, but that, somehow, his body and/or soul seem to be in transition. Left alone with him, Wonder Woman manages to bring Steve back to consciousness with a kiss. Shortly afterwards, the Amazon comes upon a gang of bank robbers, and a new arrival, a flying, costumed female who calls herself the Silver Swan, helps her bring them in. The Silver Swan flies off, and Wonder Woman discovers that the briefcase of secret documents she and Steve had been carrying is gone. Later, Diana and Etta Candy discover a rent raise has made it necessary for them to take on a new roommate. The first applicant, whom they accept, is Helen Alexandros, who has found the briefcase and returns it to Diana.

Unknown to both of them, the plain-faced, skin-blemished Helen is a former ballerina who has been badly hurt by rejections due to her “ugly duckling” face. After one performance in an ancient temple in Greece, Helen cried out to the gods that she hated men. At that point, Mars appeared from Mount Olympus and revealed to Helen that she was descended on her mother’s side from Zeus, Leda, and Helen of Troy. When Mars asked if she was ready to accept her “heritage of blood”, Helen agreed, and was transformed into the beautiful Silver Swan, with the powers of flight, great strength, and a “swan song” which could wreak destruction. Mars told the Swan that Helena would be able to change into her for an hour at a time, as long as she served him, and on the day that she destroyed Wonder Woman, she would become the Silver Swan forever.

Later, when Wonder Woman is attempting to return the briefcase, the Silver Swan snatches it away and defeats the Amazon in battle. But, unwilling to destroy Wonder Woman around witnesses, the Swan turns over the briefcase and convinces Gen. Darnell and company that she mistakenly thought Wonder Woman was stealing it. Wonder Woman herself is not convinced. And Steve Trevor finds himself in the hands of a new arrival--Dr. Psycho.

Retrieved from "https://heykidscomics.fandom.com/wiki/Wonder_Woman_Vol_1_288?oldid=1673223"
Community content is available under CC-BY-SA unless otherwise noted.