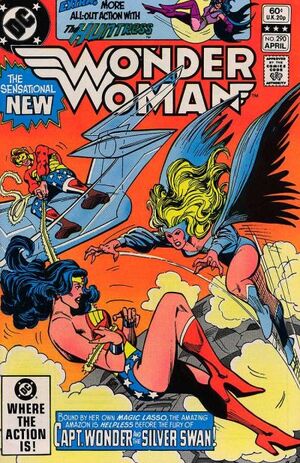 Appearing in "Panic Over Pennsylvania Avenue!"Edit

Synopsis for "Panic Over Pennsylvania Avenue!"Edit

Wonder Woman battles the Silver Swan and encircles her with the magic lasso, but the Swan’s magical powers give her the ability to stave off domination. Dr. Psycho is able to use Steve Trevor to produce enough ectoplasm to turn him into Captain Wonder again, in which identity he attacks Wonder Woman, knocks her off her Robot Plane, gains control of the lasso, frees the Swan, and ropes Wonder Woman. Captain Wonder and Silver Swan fall in love with each other at first sight. They opt to take the captive heroine to the White House and kill her before the eyes of President Ronald Reagan. But Mars appears to the Swan and demands that she order Captain Wonder to send the Robot Plane crashing into the White House and thus murder the president.

However, Steve Trevor, whose coma has been induced by his subconscious knowledge that he is not of this Earth and his desire to leave it, awakens, thus breaking Psycho’s ability to maintain his Captain Wonder persona. Psycho crashes to Earth, unharmed, but losing control of Wonder Woman, the lasso, and the plane. The Silver Swan attacks Wonder Woman, but is defeated, and the Amazon manages to prevent her plane from smashing the White House and endangering President Reagan. Disappointed in the Swan, Mars withdraws her powers and she returns to her Helen Alexandros identity. When Psycho and Helen see each other, they are mutually repelled and run away from each other. Finally, Wonder Woman reunites with Steve and recounts her adventure. Steve tells her that he dreamed he was not of this world, but that he realizes he belongs wherever she is.

Appearing in "Death Atop Its High Tower Calls"Edit

Synopsis for "Death Atop Its High Tower Calls"Edit

Retrieved from "https://heykidscomics.fandom.com/wiki/Wonder_Woman_Vol_1_290?oldid=1468688"
Community content is available under CC-BY-SA unless otherwise noted.