View source
Part of the 'Wonder Woman: The Witch and the Warrior' event 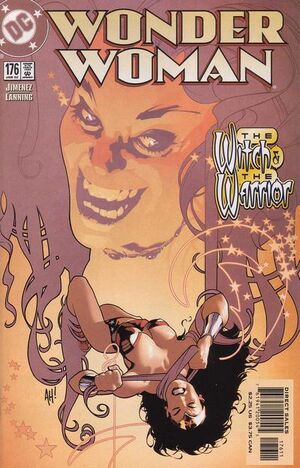 After her battle with Superman & being unable to prevent Circe from manipulating Vanessa Kapatelis into becoming the Silver Swan, she travels to Vanessa's mother's house to explain what happen and how sorry she is for what happen. While on the trip over she has a dream of Wonder Girl and Silver Swan battling it out about being Wonder Girl where her mother appears and taunts her. After talking to Mrs. Kapatelis and finding clues to where she might be Diana goes to the JLA's moon base to serve her patrol duty and dozes off and has another nightmare. Back on eath Diana has another nightmare and wakes up in the middle of the night and finds Donna Troy, also awake due to a nightmare. After asking about the nightmare, Diana figures out that it's Circe who has been implanting the dreams in their minds. Knowing where Circe would be waiting, Diana goes to Athens, Greece to confront Circe. During the start of the battle, Circe shows that she's master, using her powers on herself to change her appearance and powers. After a long battle, Wonder Women over comes Circe's transformations and magic powers, all the while telling Diana to kill her. As the battle ends, Circe's daughter Lyta consoles her mother and tells her that she never wants her to be hurt or leave her. Circe tells her daughter she's sorry for making her worry as Lyta hugs Circe.