Start a Wiki
Part of the 'Wonder Woman: Rise of the Olympian' event 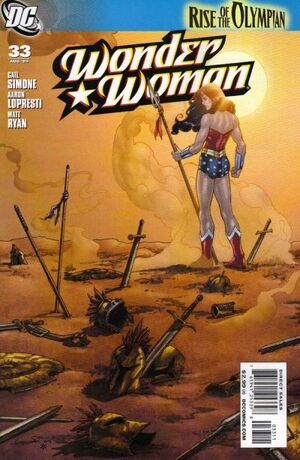 Appearing in "Rise of the Olympian Part 8: Monarch of the Dead"Edit

Synopsis for "Rise of the Olympian Part 8: Monarch of the Dead"Edit

The gravely injured Wonder Woman is carried aloft in her Sea Shell vessel back home to Themyscira. A group of Amazons on guard on the beach lead by Persephone are shocked to see the craft touch down and to find their beloved Princess lying inside. Persephone quickly orders her sisters to fetch the Queen as she lifts the weak Diana out of the vessel.

A frantic Hippolyta soon arrives and looking at her daughter's wounds immediately realises that Diana has been fighting a god and that even the Purple Healing Ray may not be able to help her. Just the Phillipus calls for her urgent attention and the Amazon Queen turns to see her pointing out to sea, where dozens of monstrous sea creatures are advancing upon the island to attack!

Taking charge of the situation she orders a reluctant Phillipus to leave the scene of battle and take Wonder Woman to the safety of the prison hidden in the caves and to stay with Diana and guard her with her life. She then rouses the other Amazons to prepare for battle, authorising the release of prisoners to assist in the fight!

Phillipus carries Wonder Woman to the caves as instructed as Diana weakly murmurs how she had wanted to leave Genocide to drown in the depths of the ocean but that she could not let herself kill in the name of revenge. Not knowing what Diana is talking about, the Amazon Captain examines Wonder Woman's wounds and tells Diana that she has multiple broken bones and that her hands are burned almost through to the bone...

Back on the beach Hippolyta and the Amazons watch as the Megalodons guarding the Amazons give their lives to try and stop the advancing hordes but to no avail. The Amazon Queen leads the charge as she rides on her winged horse into battle and slashes through a creature with her sword. But her momentum carries her crashing down onto the beach and she is momentarily dazed. As another creature advances towards her Alkyone, Myrto, Charis and Philomela take their positions around their queen, intent on fulfilling their vow to protect her at all costs.

Back at the caves Wonder Woman explains to Phillipus that Genocide had befouled her lasso and that it now burns to her touch. She had originally thought that it was because of hatred that the creature had attacked her but she now realised that it was out of jealousy. It wanted everything Diana had that it could never obtain of even comprehend. It took her lasso, her mission, her allies, her sister Donna, her friend Etta and even perhaps her future with Tom. It wanted to leave her as empty and bereft of meaning and hope as it was itself. It belonged to nothing and so it wanted no one else to ever know a home again.

Just then Wonder Woman hears the crash of Amazon weaponry being used and she asks Phillipus what is happening? The Amazon Captain tells her they are under attack but that she has orders to keep Diana here and to protect her. She can already see what Wonder Woman is thinking and tries to say that she will not be a party to her request, but Diana insists that she binds the burning lasso to her now bandaged right hand and to fetch her an axe...

Outside the battle rages ferociously as the blood of both fallen creatures and fallen Amazons stain the beach and waters. Hippolyta is not surprised to see her daughter once more disobey her orders and join the battle, as Diana cleaves her way through the creatures. Wonder Woman touches down and asks Alkyone of this is what she calls guarding the queen - allowing three of those monsters within an arms length of Hippolyta. She admonishes Alkyone and her three sisters and orders them to fulfil their vow and to do their duty. Alkyone bows her head and vows to Diana that the queen will be safe under their protection.

With that, Wonder Woman launches herself back into the air and uses her lasso to bind the monsters together, forcing them to turn on each other and devour themselves. Not far away from the battle, Ares sees the tide turn and orders Euphemus to withdraw his forces and send to Thalarion to join the attack there.

On Thalarion itself, Achilles and Jason watch from the beach as an army of creatures move ever closer to the shore. Achilles, leading from the front. orders his men to attack and to fight to the death...

Back on Themyscira, Hippolyta and the others survey the dead around them. Suddenly Athena begins to speak thorough the mouth of Persephone and explains that this is a test by Ares. He will slaughter all those whom Zeus favours to replace the Amazons. She then asks Hippolyta if she will aid the men who mean to take their place and everything the Amazons have sacrificed for, for thirty centuries and more? Wonder Woman smiles and without hesitation, the queen orders her sisters to prepare to depart for Thalarion.

On the Men's Island the fight is savage as Jason confronts the traitor, Euphemus, who tells him that Ares had promised him the world. As hope seems lost the men see a the shell vessel approach and Amazons leaping down from it to join them in battle.

Wonder Woman surveys the situation and knows that Euphemus has an almost infinite number of monsters at his disposal and that eventually the Amazons and Olympians will be overwhelmed. She also knows that the architect of this madness, Ares, is never far away from the spectacle of war. She zooms down the beach and soon spots the God of War who greets her, smiling. Without hesitation though Wonder Woman uses her axe and slams it down into the top of his head, killing him!

As she watches his life ebb away, she tells him that she had not done this for vengeance. But he had declared this war and war calls to blood like a child to its mother. And whatever nightmare future he had created is over now.

Euphemus sees his Lord expire but as Achilles prepares to kill the traitor Jason asks for him to show mercy and let the defeated and humiliated son of Poseidon slink back to his undersea domain in shame.

Just then Zeus approaches Wonder Woman and says there is no need to be remorseful over slaying Ares. He adds that he is almost relieved his son is no more and that he can always make new children..or adopt. He takes her hands and continues that he had done all this for her and her people. He had given them an end to their immortality. A chance to at along last lie beside their swords rather than wield them in never-ending servitude. He had brought back her people for Diana, as a vow to Athena. He had raised an army of men to relieve her sisters and had built this island to house them. For Diana. he had even raised a new champion to take her place so that she could become the wife and mother she was always meant to be be with whatever man has the honour to have her. And when she had foolishly made a pact with another god he had broken the pact and placed the heart of the slain god in Achilles.

On hearing this Wonder Woman becomes enraged as Zeus tells her to remove the red cloth she has worn in that god's name and to show Zeus the love and gratitude her lord and creator deserves. Wonder Woman punches Zeus as hard as she can and Achilles has to hold her back before she can pound upon Zeus some more! Diana rages that Zeus had done all of this for himself! He and Ares treat the Amazons' lives as sport and contest. They had both used her, her sisters ad the Olympian men against each other to cause needless death.

A furious Zeus gets to his feet and raises his hand, bellowing that she owes him her love and her life. "No. Never again" she fumes. Zeus replies that she saddens him and that Hippolyta will step down as leader of the Amazons as planned. Achilles will take her place and resume her mission as leader of both the Amazons and the Olympians under Zeus' command. "That is my decree for all time Diana, as your God!". Wonder Woman replies "Then I will have no gods."

A horrified Hippolyta pleads with her daughter to reconsider, saying that the Amazons do not reject their gods. Wonder Woman bows her for a moment, thinking through her next words before replying "Then I will no longer be Amazon." A sobbing Hippolyta kneels at her feet, clutching her legs and begging her not to leave this way, but Diana tells her that she cannot live as her mother had taught her while at the same time being someone else's marionette. She takes her mother's hands as the Amazon Queen murmurs that she cannot go with her daughter. Diana understands her mother's duties and that after three thousand years of loyalty Hippolyta has no other choice but to stay by Zeus' side. And she forgives Hippolyta.

A weeping Wonder Woman hugs her mother and says that she will be alright and that she has friends in the outside world now - and possibly more if she has not destroyed the chance with Tom.

Achilles says to Zeus that the Amazons fought with honour and have served long and asks why they cannot t keep their queen, but he is quickly admonished for his insolence. As Wonder Woman prepares to depart she tells Achilles to protect her people and to value their lives as his own. " I want your word Olympian." she says. He kneels before her and replies "My word Princess. May your new life praise and bless you."

As Wonder Woman flies off into the distance, already feeling more alone that she has ever felt, Alkyone and her three sisters watch her go - unable to believe that Diana is abandoning her mother yet again. For a moment during the battle Alkyone had almost believed that perhaps she had been wrong about Wonder Woman -but now she is certain that Diana is still the "Dragon" and must be destroyed. She wonders where Ares had hidden the creature Genocide's soul and then suddenly remembers the totem that the War God had given her. She holds it up in front of her and realises that Ares has given her a daughter of her own. "Hello Genocide." she says smiling. "I am to be your mother."

Retrieved from "https://heykidscomics.fandom.com/wiki/Wonder_Woman_Vol_3_33?oldid=1469276"
Community content is available under CC-BY-SA unless otherwise noted.