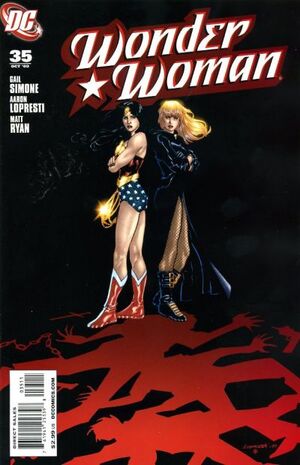 Appearing in "Birds of Paradise Part 2: Cradle to Grave"Edit

Synopsis for "Birds of Paradise Part 2: Cradle to Grave"Edit

Taking the opportunity to explore the sights of Tokyo before their next bout, Diana and Dinah visit a toy store where they see a heavily stylized Wonder Woman statue for sale. Diana says that she must have a word with her agent about the likeness approval process! Dinah mentions that she remembers Diana having once appointed the Mindi Mayer Publicist Group and Diana sadly reflects on that time in her life and how Mindi had taken her life because she had no sisters to watch over her.

Intent on lightening the mood, Dinah drags Diana out of the store and they go for noodles. As they sit down to eat, Dinah tells her friend that the Amazon Princess is always being the example everyone follows - be it Amazons, the JLA etc. Diana should take the opportunity once in a while to reassess what she wants to be for once in her life. "I don't know how to do that" Diana replies and Dinah agrees. Quickly finishing off her bowl, Dinah declares that they first rescue Sarge Steel, capture Dr. Psycho and then they fix Diana's whole life! The Amazon princess cannot help but smile.

Later that evening the two of them are back in the ring, taking down each new opponent with ease and enjoying the thrill of the fight. As they rest in the locker room before their next bout Dinah tells Diana how she loves watching the Amazon fight because unlike other heavy hitters- who simply use brute force and no technique - Diana hits exactly where it will do the most damage. "It's like watching a ballet - with compound fractures!".

Just then Sarge Steel - still inside the body of Dr. Psycho - enters the room to tell them they have five minutes before they are on again. Diana takes the opportunity to try and reach out to the dwarf - trying to get in touch with Sarge Steel's personality buried deep inside. She removes her lasso and gently touches it upon his forehead. He struggles, trying to fight the power of the golden lasso and Dinah fears that Diana is killing him. But a light appears in his eyes and he whispers "I remember".

Soon Diana and Dinah are in the ring and see that they are facing a single opponent, whose face is covered with a hood. Dinah is her usual confident self but Diana is not so sure. Upstairs in the control room, Psycho discusses the forthcoming bout with Roulette over a monitor. She asks him if he is sure that it is Wonder Woman under that disguise. He jokes "Oh, I think I can say with some authority. I'd recognise those thighs anyway." He then reassures a worried Roulette that Diana's Polynesian opponent will take the Amazon down...

As the fight begins, Diana asks to have the first attack and launches herself at her opponent. But her opponent simply raises her palm calmly and her fist collides with it - causing Diana to dry out in agony. Diana stares in shock and pain as her opponent removes her cloak and hood and shows herself to be Pele, Goddess of Violence. She then uses her powers to strip both Diana and Dinah of their disguises. Pele tells Dinah that there is no need for her to die and that this is a matter between her and Wonder Woman. "Leave the ring or die absolutely!". Black Canary advances, threatening to lay her low but Wonder Woman holds her back and quietly tells her that she knows what this is about and that Pele is right.

Suddenly Pele uses her magic and Wonder Woman is engulfed in magic flames as she is transported to the Goddess's realm. Black Canary calls out to Wonder Woman but sees that the Amazon's eyes are lifeless. Enraged, she quickly advances upon Pele and hits her in the face but the Goddess has also left her physical body to join Wonder Woman in combat.

On the shoreline of a Polynesian Island, Pele tells Wonder Woman that this was the home of her father, Kane Milohai. All he wanted was peace and joy for his subjects but because he did Diana a great kindness by helping her in her hour of need, the Amazon's Patron God Zeus ripped Kane's living heart out! Wonder Woman listens, knowing she has no words to defend herself to this grieving daughter. What she says is all true. Pele then hits Wonder Woman sending her crashing back into the waves...

Back in the ring meanwhile, Psycho sees that the lifeless Wonder Woman is now completely defenseless and orders everyone to attack her. As they charge into the ring Black Canary faces off to them - vowing that she will not let a single one of them touch a hair on her friend...

On the Island Pele kicks Wonder Woman in fury, raging that the Amazon had never thought about her father and that she shows her supposed grief by fighting in costumes for pennies and applause! "You shame everything he was!"

Wonder Woman thinks to herself that she has fought every kind of creature but of all of them a daughter's tears might be the most impossible, the most horrifying. She gets to her feet and tells Pele that she did not know what Zeus had done until it was too late. She has renounced him forever for his crime. Pele hurls Diana once more calling her a liar and setting her father alone against the wrath of her entire Olympic Pantheon. Wonder Woman blocks another punch knowing that whatever guilt and sorrow she may feel for Kane's death, she cannot let his daughter kill her for her mistake. She kicks out sending Pele tumbling, warning that she will fight back if attacked...

In the ring, Dinah finishes off the last of the combatants and raises her arms in triumph to the audience. "Have I made myself clear? Unnn -defeated!". Meanwhile a now free from mind control Sarge Steel fight his way up to the control room intent on finding Psycho...

On the Island Pele grabs Wonder Woman and pushes her into lava, and Diana realises that the Goddess is just too strong. As Pele attempts to push her completely underneath the searing molten rock another lightning bolt erupts from Wonder Woman's bracelets and knocks the Goddess flying. The Amazon Princess gets to her, body covered in burns, realising that the lightning is that of Zeus. But how and why is it responding to her? Focusing on her opponent again however, she tells Pele that she loved Kane Milohai and that the Goddess is right - it was her coming to him that caused his death and she has not yet paid her respects. She then kneels down in submission and says "I am sorry. My vow to him now passes to you. What amends would you have me make?"

There are tears from the former Princess and now orphaned Goddess. And a terrible promise is made. And then Wonder Woman is returned.

Psycho desperately tries to gather his things before making an escape but the door flies open and he is confronted by Wonder Woman, Back Canary and a very pissed off Sarge Steel!!

Some time later having returned to America and taken Psycho into custody, Wonder Woman touches down on a sidewalk outside her apartment where Tom Tresser is waiting for her. He sees that she has burns all over and asks if she is alright? She replies that she is tender all over and needs some time to heal. He replies that he could make exactly the same statement about how he is feeling too. She offers to talk some more over a long hot shower but he declines and she attempts to reply that she needs to explain and apologise for her actions regarding their relationship. But before she can continue he opens the trunk of his car and takes out the Amazon spear he had been given. He hands it to the surprised Amazon Princess and says "Whatever this was between us...whatever it was going to be...whatever it could have been...it's over."

Retrieved from "https://heykidscomics.fandom.com/wiki/Wonder_Woman_Vol_3_35?oldid=1469280"
Community content is available under CC-BY-SA unless otherwise noted.