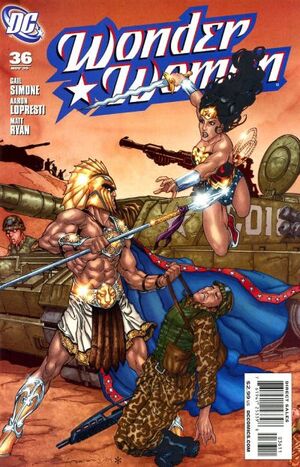 Following on from the events of the previous evening, a troubled Diana Confronts Giganta on a beach, suspecting that the villainess is up to no good being not that far away from a military installation. As Giganta protests her innocence Wonder Woman clouts her hard, sending her crashing down into the foaming waters and ordering her once again to "stand down". As Wonder Woman takes out her frustration on Giganta, her opponent finally asks her to stop and reiterates that she was not doing anything sinister.

Calming down a little, Wonder Woman asks what she is doing here and is told that Giganta is actually waiting for her date to arrive. Wonder Woman ruefully acknowledges the irony of this following her conversation with Tom the previous evening regarding their own "relationship".

Meanwhile on Themyscira, Achilles approaches Alkyone and apologises for not showing her the respect she deserves. He holds out his hand and reveals a nectarine. He begins reciting the Amazon ritual of "bonding" and a surprised and flattered Alkyone accepts his offer to wear the nectarine. Achilles places it around her neck, conscious of the fact that her fellow sisters are watching every move, weapons poised. Alkyone raises her own sword and tells Achilles that this is a marriage of state only and that there will be no physical congress. He agrees, taken rather aback that she would even think he had ulterior sexual motives. Suddenly Jason approaches and tells them that something extraordinary has happened. Five Amazons have become pregnant by immaculate conception!

Back on the beach, Wonder Woman has called a truce and now sits down wistfully peering into the distance as Giganta comments how she has never seen Diana like this before. She sits down next to the Amazon Princess and asks what is troubling her? Wonder Woman recounts the events of the previous evening...

Tom had handed her back the Amazon spear saying that Diana had lied to her. She had replied that it had not been a lie - merely a mistake. She had then grabbed him and flown up to her waiting invisible jet where they flown to the Amazon Jungles to carry on their conversation in private! She had told him how she had not been forthcoming to him. Tom had replied that she had told him flat out that she "didn't love him", so how can he trust her now? Wonder Woman had then taken his hand in hers and wrapped her golden lasso around them. She had told him that he was now able to peer into her very soul - something she has never let anyone else do. He had then asked her why she had chosen him? She was a Princess and a Goddess, whereas he was a nothing.

She had replied that Amazon mating was not a dance like it was in Man's World. It was more like combat. You tested one another as opponents and then you tested what you were as allies. She had tried love the human way but had not quite managed it, so had thought it worth trying the Amazon method. The Amazons did not wait for love to bloom fully. When attraction struck, they embraced it for play - or forever. She had then shown him how she felt about him now. Tom had then seen a vision of the two of them marrying, of their first child and of eternal happiness. A confused Tom had then reminded her what Genocide had said, about how she had wanted to "breed" with him to re-start the Amazon nation. She had responded that Genocide had always seen an uglier world than they did and had skewed the truth for its own ends. But she had felt an imperative for her culture not to be lost. At the time they had met her people had been scattered and had forgotten their way. She had thought that if she died and her mother eventually faded, then Tom at least would be left to carry on by bringing up their children.

Tom had then told her that as a spy he lied for a living and that he hurt people and sometimes they hurt him. His luck was not infinite and he could never have kids knowing that one day he might get killed and never be alive to see them grow up. "And you didn't ask me" he had added. He had then kissed her tenderly before adding that he did not belong here and they had then said their goodbyes.

A sympathetic Giganta says that she had "been there" and understands Diana's predicament. Suddenly the sand in front of them rises up and takes the form of the Goddess Pele. She reminds Wonder Woman of her vow and that her father's blood must be paid for. Wonder Woman gets to her feet...

A short while later Wonder Woman stands before Achilles and his men, who are about to embark on another mission to forcibly disarm the U.S. Army invading a smaller nation. He tells her that he had been expecting her and does not understand why, when she laments war, she fights them when they are trying to stop a larger, aggressive nation conquering a smaller one. "Your time in America has left you confused" he adds. She replies that his methods include killing soldiers on both sides and she is not confused about that in the least bit.

He responds that he respects her and has no wish to kill her, but does she think she can stand against him and his whole army of men? She gestures and Giganta appears behind her. "I brought an army of my own" Wonder Woman replies. Battle then commences and as the bemused U.S. army look on, Giganta tangles with the other Olympians while Wonder Woman and Achilles fight each other. The Amazon Princess remembers that when they last fought he had almost anticipated her every move, so she decides to hang on to him and pummel him mercilessly this time! He manages to lash out with his spear though and slices a lock of her hair. She responds by punching him into the side of a nearby U.S. tank! She manages to give him a nose bleed and scuffling she gets the better of him, pinning him down with his own spear. As Giganta encourages her to finish Achilles off, Wonder Woman hands him the spear back and lets him get to his feet saying "We are the people we profess to lecture. We are every boastful country, every raging unbending zealot, every timid man frightened of his neighbour. Must we be those foolish people brother? Zeus has drunk oceans of warrior's blood Achilles. I beg you. Defy him. Let's wage an absence of war."

He pauses and hesitates a moment before replying slowly that he is sorry but that he cannot. "Unlike some I know my duty". As he walks away he adds that when they next meet, she will not interfere because that have a tactical advantage. "Your mother, Princess. In a hangman's noose. This war is over Diana. You lose."

Retrieved from "https://heykidscomics.fandom.com/wiki/Wonder_Woman_Vol_3_36?oldid=1469282"
Community content is available under CC-BY-SA unless otherwise noted.