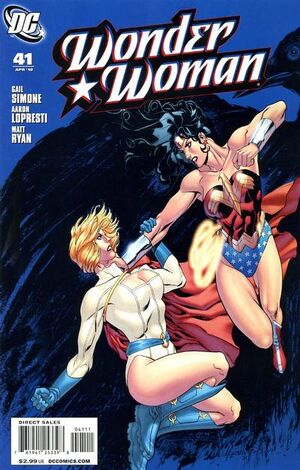 Appearing in "A Murder of Crows, Part Two - Throwdown"Edit

Synopsis for "A Murder of Crows, Part Two - Throwdown"Edit

Achilles decides that he still has a mission to fulfil but that he will no longer shed any more blood of innocents. Departing Thalarion on his flying elephant, he lands at a mansion located in the United States, which Diana has arranged to become his new residence in Man's World. From here he can promote his message to end all wars.

He is met by a man who introduces himself as Patrick Cleese and says that he has been asked by Diana to show Achilles around the estate. To Achilles, who has up until now been feeling a little lost and alone in this new world, the name sounds just like 'Patroclus', his dear friend from the days of the Trojan Wars. He smiles to himself that Diana has thought of everything to make him feel at home!

Back in Washington DC, Wonder Woman is taking another pounding from Powergirl. Every time the Amazon Princess tries to reason with the Kryptonian the response is a fist in her face! As she once again has to defend herself from an almost enraged Kara, she wonders what on earth is making her friend behave this way towards her.

Meanwhile down below in the street the five Children of Ares watch the battle taking pace in the skies above with mock disdain, commenting on how this is no way for two heroines to behave and how improper their attire is! They proceed to move on to their next target - intent on inflaming the ire of the people with some white supremacists literature...

Back above, Wonder Woman takes another punch and finds herself flying all the way across the border over to Canada! She brushes herself off and decides that enough is enough. Kara has always been refreshingly free of the animus that some powerful super heroines seem to feel towards her. She is completely herself. But if Kara thinks that Diana will continue to allow her to use the Amazon Princess as a spar dummy she can think again!

Wonder Woman zooms back to the city at super speed and hits Powergirl in the stomach, sending her ploughing into the concrete street below. Kara becomes further enraged, acknowledging that her opponent can certainly hit but vowing to show what she herself can do when she really takes off the gloves.

As the after tremors of the impact crater she has created rock a nearby bus however, she is momentarily taken aback when she sees Wonder Woman ensuring that the passengers disembark safely. She suddenly becomes a little confused. this is Wonder Woman we are talking about right? Diana? Powergirl starts to wonder if she is being hoodwinked here into thinking her friend is a villain? Just then the five children she had met earlier step forward and comment on how Wonder Woman is seeking all the attention again. Powergirl replies that Diana is not like that and they agree with her - adding that the woman she has ben fighting is not actually the real Wonder Woman. As the Amazon Princess approaches the they conjure up a mirage so that Powergirl perceives Diana to be some sort of demonic version.

Wonder Woman calmly tells Powergirl that it is the children who are influencing her and are behind all the trouble in the city. Can she not see that? Kara responds with a powerful punch to Wonder Woman's face sending her hurtling into a nearby shop window. As the Amazon tries to ensnare Kara with her lasso though the Kryptonian's super speed proves faster and she kicks Wonder Woman in the solar plexus. As her opponent crumples to the floor, Powergirl lifts up the empty bus and slams it down onto Wonder Woman, promising that whatever has possessed the Amazon she will ensure she pounds it straight to hell.

The children look on satisfied with their work but concerned that Wonder Woman has already wised up to them. They decide to accelerate their plans and as they walk away they leave a baying mob calling out for Powergirl to kill Wonder Woman.

For her part, the Amazon Princess bursts out from the wreckage and reminds herself that while she and Powergirl may be evenly matched speed and strength wise, there are more ways to fight then simply with brute strength. Black Canary had told her that she loved to watch Diana fight because so many heavy hitters just use their strength. That's all they need. There is no strength or style unlike how Diana uses her skills in combat.

As Powergirl struggles and squirms to break free, Diana, using the power of truth as her weapon, calmly asks her when has Kara ever..and she means ever...done as she was told? With that Kara suddenly stops as the realisation dawns upon her that none of her actions today have been of her own free will and that she has been played...

Meanwhile at the hospital one of Ares Children snakes into Etta's hospital room and instructs Steve Trevor to shoot his wife in the face...

Across the city, Wonder Woman chats with Powergirl who is buying herself eight hot dogs which " help her to think"! Diana tells Kara that she is unsure how many of these emotion controlling children are running loose in the city and who exactly they are - although she has a theory. She points to a nearby gathering mob and tells Kara that those people are not evil but the tiny sparks of distrust and fear they have tried to overcome have been exploited and magnified by those children. One of them needs to find the children and stop them and one of them needs to calm the mob before a riot breaks out. Powergirl immediately volunteers to hunt down the children but Wonder Woman says that only she can face the monsters and that it will be down to Powergirl to reason with he crowd.

An uncertain Kara replies that she has no idea of diplomacy but Diana assures her she has faith in her abilities and knows she can do this. She then asks a surprised Powergirl to kindly tie her up in her own lasso!

A short while later Powergirl touches down in the middle of the crowd and as they slowly advance upon her she orders them to cease and desist. But as the mob continues to angrily converge upon her she realises that approach hasn't' quite worked as planned! She thinks to herself what would Diana do in this situation and cries out to the people to "think of the power of love and all that crap...no? How about hope and brotherhood or whatever? No go?"

Not far away, hiding in an alley, four of the Children of Ares watch the events and gleefully predict a death toll in the thousands but suddenly find themselves in the grasp of Wonder Woman, who is draped in her own lasso. She tells them she is the mistress of the hunt and can always track the footprints of the Spawn of Ares. They spit back that she is too late and that she killed their father and now they will make those she loves and protects kill each other. Won't you help them Diana? Won't you bathe in their blood?" but she calmly tells them that their powers of persuasion will not work on her and that she has the power of truth on her side. She then raises her hand and tells them to prepare for punishment...

Meanwhile across the street Powergirl tells the mob that they all feel alone and think that they are the only one who feel this way. They do not understand the people around them. And they get mad. But look around. Look at the people they want to hurt because they hurt. Are they really their enemies or simply their neighbours? She adds that she is not saying they all have to love each other but don't be alone...be part of something bigger. With that the effects of the Children dissipate and the crowd begins to dissolve as people drift slowly away...

At the hospital Steve Trevor struggles to overcome the power of the final Child as he points the gun at Etta who tells him to pull the trigger. Suddenly one of the gorillas bursts in and knocks out the child, snapping Trevor out of the trance...

A short while later Kara explains to Diana that she is not even sure what she had said to the people and the Amazon Princess replies that she had spoken from her heart. Powergirl then asks what Wonder Woman had done with the children. She replies that they had been taken to the Amazons' Reformation Island for healing, although she is not hopeful that this will be successful. "But we have to try...they are part Amazon after all."

Kara asks what punishment she had threatened them with when she had caught them. Wonder Woman replied that she had given them a good hard spanking!

Retrieved from "https://heykidscomics.fandom.com/wiki/Wonder_Woman_Vol_3_41?oldid=1469292"
Community content is available under CC-BY-SA unless otherwise noted.