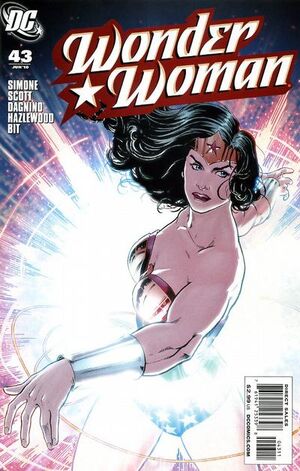 Appearing in "Wrath of the Silver Serpent, Part 2 of 3: Blood Red and Bone Deep"Edit

Synopsis for "Wrath of the Silver Serpent, Part 2 of 3: Blood Red and Bone Deep"Edit

It is the night following Wonder Woman's victory in the contest on Themyscira to chose a champion to represent the Amazons in Man's World. Hippolyta is trying to come to terms with losing her daughter to the outside world as Phillipus tells her beloved queen that Diana will be back. Hippolyta remarks that perhaps they loved her too well. She then asks her Captain to summon her Artisans as Diana will need something to wear.

Pallas sketches a costume based on traditional Amazon designs but Hippolyta feels it looks a little too much like a warrior's costume. She leads her Artisans outside onto the balcony as a storm fills the night skies, tinged with red from moonshine. She says "Do we need better inspiration? She is the daughter of the Hunter's Moon. She will wear her crimson. Cassiopeia is her constellation. The W, the Crown and the white hot stars on a field of deep blue. As Pallas makes changes to her designs Io asks why she has been summoned? Hippolyta points to an eagle flying past and requests that Io forges a breastplate in the shape of this noble bird.

Io kneels before her queen and taking her hand, asks whether there is any way that she can make her daughter stay? "We lose our Princess!" she bemoans. Hippolyta looks up into the skies and simply replies "No. We simply give her back to the sky."

Astarte tells Wonder Woman that she has her mother's eyes. Diana replies that she also has other traits of her mother - perhaps she will impose some upon her opponent! Astarte orders her to stand down and tells Wonder Woman that her probes will collect every scrap of usable technology on Earth and then their farming vats will grind every clump of bio-organic material into a rich slurry that fuels their ships and their bellies.

Wonder Woman says that she has other ideas and floats up out of the crater. The nervous soldiers raise their weapons but a casual Astarte tells them to hold fire. The Amazon Princess tells her foe to take her soldiers, guns and ships and leave, or "I will make you nothing but a bad memory...Auntie"

Astarte replies that Hippolyta was a cry baby too. Astarte then surveys Wonder Woman's costume noticing the eagle emblem and asks what is the significance? Diana replies that her kind would not understand. Astarte agrees that is entirely possible and raises her weapon to fire. Wonder Woman instantly removes her tiara and sends it flying around the rim of the crater, knocking the guns from the startled soldiers' arms as they open fire!She deflects the beams being fired at her as they try and recover and ploughs into them, effortlessly felling each one with expertly executed punches and kicks!

Astarte orders more power to be provided to their shield technology and the Lieutenant asks if they should "Open Hold 17?". Astarte says no, adding that they should not let "that thing" loose. She then orders the Silver Serpent to be dropped on the city.

Up above, doors open in the belly of the ship and a huge mechanical Silver Serpent crashes down, leveling buildings in its wake - before beginning to tear up the city. Not far away Steve and Etta are racing in a car down the street and feel the shudder and hear the rumble of the creature's impact. Etta says that as nobody else can get through the shield covering Washington DC they are on their own and that Steve needs to summon every available DMA agent. "What choice do we have?" she states. Steve reaches into the back seat and puts on his flying jacket. "Get me something that flies" he tells her...

Meanwhile Wonder Woman suddenly finds her blows are being deflected by the shield technology worn by each soldier now that the power has been boosted. As she ducks to avoid a shot taken at her the soldier behind her is hit by the energy beam which shatters her helmet and shield. Wonder Woman immediately sees an opportunity and decides that if they want to fight dirty - so can she! She wrestles the blaster from her attackers arm and putting it on her own arm, starts to blast the other soldiers who go down like bowling pins. As a desperate Astarte tries to call for more shock troops she is tackled to the floor by the Amazon Princess...

Elsewhere in the city, Tolifhar and Mirada are assisting the other assembled DMA agents as they try to save innocents from the destruction being wrought by the Serpent. Although they have gathered what little remains of the armoury that had been salvaged after the destruction of the DMA Headquarters, they know that they have nothing that can stop the creature.

Suddenly though Achilles appears in the sky riding his flying elephant and smashes the creature's head to pieces. As it topples to the ground still writhing he uses his spear to finish it off. Etta runs over to where he stands victorious and tells him that she and the others are friends of Diana. He asks Etta what can be done to stop this abomination? She points up in the sky to where Wonder Woman has Astarte wrapped in her lasso and says "You could get up there and help Diana..."

Up above meanwhile, Wonder Woman is forcing Astarte to see herself truthfully through the power of the lasso. Diana informs her that she cannot control the images Astarte sees in her subconscious - "the truth is a river that will not be dammed." Astarte sees the aliens, known as the Citizenry, arrive at the crib where Hippolyta lays protected by her then older sister, Astarte. As the vision unfolds she tells Diana that the Citizenry where different, more compassionate back then and would take one hundred exceptional females from each planet, restock provisions and leave. They wanted to take Hippolyta as tribute..her baby sister...the one thing she'd ever loved - but they didn't want Astarte as well. She begged them to take her instead and asked if Hippolyta would remember her? The Citizenry reply that she will remember nothing before this night - their way of healing some of the hurt of those left behind.

As the emotions flood back and tears well in her eyes, an angry Astarte lashes out at Wonder Woman, her jealousy now clear. She rages that the Citizenry did not want her - they only wanted Hippolyta. And she was repaid for her love with three thousand years of slavery! Forced to eat horrendous things. Hippolyta does not even know what Astarte had given up for her - she does not even know her sister exists! As she at last regains control of her emotions she tells Wonder Woman that she may have extracted tears from her opponent but she will give Diana's world tears. She continues to explain to a horrified Wonder Woman that the ship hovering above is merely a scouting vessel - and that an Armada of two hundred thousand is on its way.

She then continues to explain that she is responsible for feeding and fueling the fleet - a planet's worth of people unwelcome anywhere. She had killed the captain who had originally kidnapped her and made them a force to frighten even the Oans. There is no surrender. No prisoners.

"A life of endless murder?" replies Wonder Woman. "I offer you a way out." Astarte responds that there is none save death - for either of us. In fact, she knows that already her own officers are plotting to kill her. She adds that she is ordering the fleet to this location - and Diana can join them if she wants before the end. Wonder Woman places a gentle hand upon Astarte's shoulder and says that her life is joyless and without expectation. She offers her foe something in exchange for the safety of Earth. "A chance to consolidate your power Captain. Your officers believe you grow weak. Show them you're strong. Show them how you've dominated this world completely. Entertain them Captain. Give them a duel."

A short while later on board the ship, Astarte leads Wonder Woman towards the main arena as the other soldiers look on. Astarte orders her lieutenant to unlock Hold 17 and bring some weaponry for the Amazon Princess to put on. She tells Diana that even with her abilities she will die too fast without them. "It would weaken my position should that occur. As Wonder Woman dons the weapons she is told by Astarte that they do not have time to teach her how to use the devices but that it will make no difference.

Wonder Woman calmly asks that if she winds this fight - that Astarte and her troops will leave the system? Astarte agrees but assures the Amazon Princess that she will not win the fight. And the moment she has been beaten she will send everything we have at the planet below. Not even the meta humans will be able to stop them.

As they enter the vast arena Wonder Woman sees her opponent standing on the other side. She asks Astarte what lives in Hold 17? "What is it I have to kill?" A smiling Astarte replies that it is the most vicious Soldier they have ever raised. Every cruel impulse imagined. Her name is Theana

"And she is our Princess. She is our Champion. And she is my daughter!"

Retrieved from "https://heykidscomics.fandom.com/wiki/Wonder_Woman_Vol_3_43?oldid=1469296"
Community content is available under CC-BY-SA unless otherwise noted.