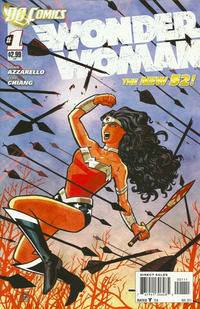 The Gods walk among us. To them, our lives are playthings. Only one woman would dare to protect humanity from the wrath of such strange and powerful forces. But is she one of us – or one of them?

Retrieved from "https://heykidscomics.fandom.com/wiki/Wonder_Woman_Vol_4_1?oldid=1660579"
Community content is available under CC-BY-SA unless otherwise noted.