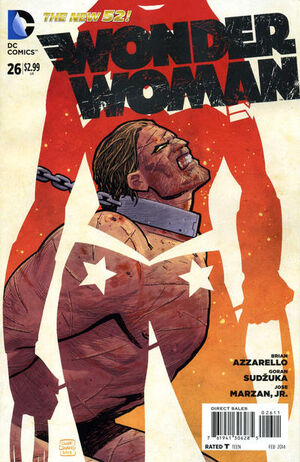 The death toll stands at two now... How high do you suppose it'll go? Or, perish the thought... which of your friends is next?

Milan, the blind seer, is being held captive in Chernobyl, as his half-sister Cassandra attempts to coerce him into revealing the location of the First Born. Unfortunately, Milan doesn't know where the First Born is, and Cassandra's were-hyena followers are looking hungry. Fortunately, Orion is a friend to Milan, and he comes to the blind man's rescue.

Meanwhile, with Hermes' help, Wonder Woman arrives in Chernobyl as well, led there by her half-sister Siracca, who is helping her seek out Cassandra. The city disturbs Diana, because as a woman who has always believed in the goodness of man, Chernobyl is proof that there is also a lack of goodness to be found in man as well. She would rather not be wrong about humanity. As Siracca goes ahead to find a way to Cassandra's hideaway, Diana and Hermes are set upon by more of the hyenas.

In London, Strife taunts Zola, reminding that Wonder Woman has rushed off once again to save the world - and indirectly, her son Zeke. Though Strife is never one to trust, Zola is unaware of the goddess' more malevolent purpose now, seeking revenge for the death of War. She claims that she was left behind by Wonder Woman to babysit - noting that there seems to be a trend of people dying to protect Zola and Zeke. The death toll now stands at two. Which of Zola's friends will be next?

Despite his bravado upon entering, Orion is outclassed by Cassandra, in terms of weaponry. Somehow, she has found a way to hurt a New God. Worried for Orion, Milan begs Cassandra not to hurt him, and she promises that she won't - if he tells her where the First Born is. She removes the blind-fold from his hollow eyes, just as Diana and Hermes crash through the roof. Gleefully, Cassandra comments that if Milan wants any of his family to survive this encounter, he will tell her what he sees.

As it happens, the First Born is - and has been - being tortured by Apollo, who claimed ownership over him when Diana defeated him and offered him up.

Angrily, Cassandra predicts that all of Milan's friends will die if he does not help her. Finally, Milan gives in, explaining that he has seen where the First Born is - but he would die to keep her from that place. Cassandra is eager to oblige him in that, but Diana will not see it happen. She intervenes, revealing that the First Born is on Mount Olympus. With the information she needs, Cassandra tosses Milan aside, but not without affixing an explosive charge to his chest, set to detonate in one minute. Angrily, Milan complains that Diana had made his brave stand pointless by giving up what he would have died to protect for his sake. More concerned about the bomb, Orion decides it is best to take Milan to New Genesis in the hopes that they can get the bomb removed before they blow up inside a Boom Tube.

Feeling guilty, Diana returns to London to find that Zola has left, leaving a note behind. The note thanks Diana for her trouble in trying to protect her and her son, but goes on to say that it is time for Zola and Zeke to look after themselves. The final line of the note begs Diana not to come looking for her.

Unfortunately, the first person Zola meets in the London tubes in her attempt to strike out on her own is Dionysus.

Retrieved from "https://heykidscomics.fandom.com/wiki/Wonder_Woman_Vol_4_26?oldid=1469352"
Community content is available under CC-BY-SA unless otherwise noted.