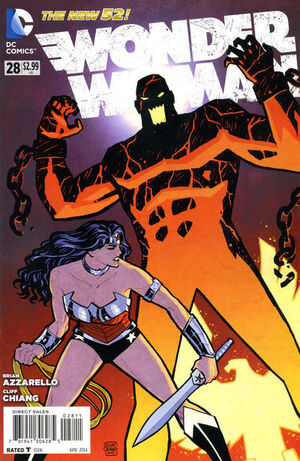 He didn't run... he tried to protect us. So yeah, I know it's a bad idea... but we better return the favour.

Having allowed her friend Zola escape from her protection with her son Zeke, Wonder Woman has asked Artemis to help track them, against the warnings of Hermes. Together, she, Hermes, and Hera follow Artemis down into the London Underground. Despite the animosity between Diana and Artemis, the Amazon refuses to give up believing in others, and needs Artemis' help at any rate, because Strife's meddling obscures Zola from other means of search. Down in the tube station, Artemis warns that the trail stops there, noting that the likelihood that Zola got on a train is low. Dionysus was also there, and he surely led her away by some means other than public transport.

On Mount Olympus, Apollo, ruler of the Gods of Olympus is locked in the death-grip of the First Born, who has finally escaped his torture and now demands what belongs to Apollo - the throne. Apollo finds that his cumulative powers are not enough to deter the First Born in his rage.

Dio controls the vines of the forest, and uses them to bind the attacking minotaur, so that he can't move. Thinking he's won, Dio turns back to Zola, and asks how he should torture the beast. Unfortunately he is overconfident, and the minotaur breaks free and snaps Dionysus' neck.

Soon, Diana and company are in Provence as well, having followed Dio's trail to his villa. Artemis senses that he, Zola, and five other Parisians left into the woods, from which a horrifying growl emanates loudly. Grinning, Artemis announces that, at last, they have a proper hunt ahead of them. As they follow her toward the woods, Diana warns the mortal Hera to remain behind.

Zola watches the minotaur scream into the sky over Dio's body, and then walk away with the corpse in its hand. She realizes that it wasn't after her in the first place. Since Dio had tried to protect her, she feels the need to return the favour, and follows. From the shadows, she watches the minotaur carry Dio up to Cassandra's aircraft, where the bastard child of Zeus orders him taken inside, planning to break his spirit, well aware that he can survive a mere neck-snapping. After she returns inside, the clearing is bathed in the blueish glow of moonlight, as Artemis leads Wonder Woman into the woods. Angrily, the Hyena guards challenge them to battle, and Diana warns that these soldiers are devoid of mercy.

Drawn by the chaos, Cassandra watches the battle take place, opting to leave rather than watch or help. Through the battle, though, Diana locks eyes with the minotaur, and feels a spark of recognition. Seeing the aircraft taking off, Diana flies after it, crying that its occupants are cowards. She clings to the aircraft, unnoticed by Cassandra's men.

Inside, meanwhile, Cassandra begins questioning Dio, admitting that she needed any God. All she wants is access to Olympus. Smirking, Dio responds that all she would have had to do is ask. He would be happy to introduce her to Apollo personally, whom he assumes would squash her like a bug.

Not so, as it happens, because the First Born's hate burns hotter than a thousand suns, and it is bigger than any of Apollo's ambitions. He is the only one who deserves the power of Olympus, and he is eager to see his seatwarmer done with. Each of the Gods of Olympus will fall to his hand, one by one, until none remain to rule it but he. Even as Cassandra's aircraft broaches the peak of the mountain, Apollo warns that the First Born's plans will have to be realized over his dead body, and detonates a massive outburst of energy, destroying tower on which they stand.

Retrieved from "https://heykidscomics.fandom.com/wiki/Wonder_Woman_Vol_4_28?oldid=1469356"
Community content is available under CC-BY-SA unless otherwise noted.