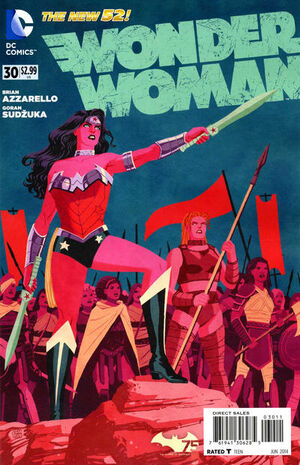 There were times when I felt alone on this island, that I was different. And I was. But I've since learned that whatever differences we may have are paltry next to what we share in common. And that makes me happy. I am an Amazon, and I have never been prouder to say that...

Appearing in "Throne to the Wolves"Edit

Synopsis for "Throne to the Wolves"Edit

At the shores of the River Styx, Poseidon and Hades discuss the threat that faces them with the ongoing turmoil on Mount Olympus. Poseidon is of the opinion that they'd be best off to wait, and not make targets of themselves. Despite feeling the argument is flawed, Hades concedes to Poseidon, and agrees to remain under the radar, setting a halt to the marching of his army of the dead.

Meanwhile, on Paradise Island, Wonder Woman is pleased to see the Amazons restored, but her mother remains locked in stone. Regretfully, Hera explains that she does not understand why Hippolyta was not restored. She had wished the woman to clay, but could not unwish it. She believes something is preventing her from doing so. Bitterly, Aleka doubts Hera's claims, mistrusting the goddess after she turned all of the Amazons to snakes. The only one in whom she places her trust is her queen - who remains statuesque.

Cattily, Hera warns that Hippolyta is no longer queen of the Amazons. In her absence, the princess - Diana - is Queen. This only serves to build suspicion in Aleka further, accusing Diana of treachery against her own mother for the sake of the Amazon throne. Annoyed by Aleka's impudence, Hera begins transforming Aleka back into a snake, but Diana intervenes.

Later, Diana meets with her remaining allies, away from the Amazons. She must concede that it would be a good idea for Dionysus and Hermes leave, for the time being, as a show of good faith. The Amazons do not trust men, and sensitivity to their wishes would go along way to establishing Diana as a Queen worth following. The infant Zeke, however, may remain under the protection of Hera.

The Amazons, meanwhile, argue amongst themselves about whether it is right to follow Diana, when she is now a goddess, and her mother remains in stone. A cloaked woman emerges from the back of the group and begins sowing dissent among them, urging them to cross the line from mere displeasure and concern to mutiny.

On Mount Olympus, the First Born feeds his now broken ally Cassandra, warning that he has hunger too. He will never be contented, and will always crave. He enlists her to help him to get what he wants. As she gobbles up the steak of meat he throws her, he taunts her, noticing how ravenously she eats it. She reminds that he starved her, and he reminds that she liked her meal all the same, revealing that the meat came from Cheever, the man who had helped her get to this point. Chuckling to himself as she vomits, he warns that she will become one of his people, or it will be him eating her.

Back on the island, Zola admits that she likes the place, but that she wishes to leave. Diana assures her that she has seen things that no normal person even knows about - but that only goes to show how special Zola is. She merely wants to keep her friend safe on the island. Zola responds that she never feels safer than when she's alone with her son Zeke.

That night, Diana addresses the assembled Amazons not as a god or their queen, but as a sister. Despite occasionally feeling like she didn't belong with them on the island, she now realizes that the things they had in common were a much stronger bond than those thing that made her different from them could have pulled them apart. For all her struggling against it and loneliness, Diana is happy to be an Amazon. However, speaking as their Queen, she announces that things have got to change on the island. Aleka scoffs from the crowd, and Diana responds that the Amazons must evolve . Their isolation is a detriment to their society. Now is as good a time as any to open the doors they have closed. She turns to Zola, explaining that the woman is her friend and needs their help. For that reason, she asks that all of the Amazons agree to become mothers to Zola's child. Angrily, they respond that they don't want to serve a male child, but Diana ignores them, stating that her first order of business as Amazon Queen is to pledge the life of every Amazon warrior to Zeke's survival.

Meanwhile, in the realm of Hades, Hades confides in his imprisoned father Cronus that he wants to go to war with Olympus. The battle would surely increase the ranks of his own army by all the death it would cause. It almost seems foolish for him not to attack. Surprising him, the First Born appears behind him, warning that he is too late, and blowing out the candles on his head.

Retrieved from "https://heykidscomics.fandom.com/wiki/Wonder_Woman_Vol_4_30?oldid=1469360"
Community content is available under CC-BY-SA unless otherwise noted.