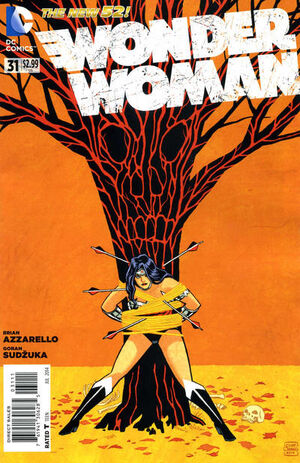 Dessa, we are a strong society, but I'm learning that some of what we are... comes from weakness-- old weakness. That through our strengths we can grow past. It's time to admit we're not perfect. And it's an admission that I, for one, am relieved to make. Because out of perfection...? Nothing can be made.

Appearing in "This Monster's Gone Eleven"Edit

Synopsis for "This Monster's Gone Eleven"Edit

In London, Hermes is in a morose mood following the loss of Mount Olympus to the First Born. Dionysus encourages him to be of cheer, but Hermes is further annoyed that the pair of them have been sidelined by Wonder Woman because of their sex. Dio persists in trying to cheer him up, but both are suddenly distracted when they realize that the dead are walking among mortals.

Meanwhile, on Paradise Island, the Amazons of Themyscira do not welcome the social changes that Diana has called for in her new role as their queen. Dessa suggests that Diana's focus should be on preparing for the war with the First Born instead of concerning the Amazons with playing mother to a male baby. Diana explains that she must make these changes now, lest it be too late when the battle comes. Dessa is moved by Diana's passion, and promises to serve her and the other Amazons. Aleka, though, is unimpressed.

Later, Diana trains with Artemis, who feels that Diana's method of ruling the Amazons is wrong-headed. As the goddess of War, Diana ought to welcome the worship of the Amazons, but she rejects it. Artemis takes that as an insult, and challenges Diana to fight her without the protection of her Bracelets of Submission. Diana refuses, restraining the urge to fight harder.

Meanwhile, Zola sleepily tells her baby boy of how their home in Virginia will likely remain in the rearview mirror of their lives, with friends like Diana and the Amazons - but she muses that perhaps one day they will learn to call Paradise Island their home. She realizes, though, that Zeke is not next to her in the bed. He's missing.

Hermes and Dio travel to Hell, intent on confronting their uncle about the encroachment. What they find though, is Cassandra, desperately feeding Cronus, whose hunger can never be satiated. What she is feeding him with appears to be his own son - Hades. No one remains to rule Hell.

Once again, Diana promises to return Zeke to his mother, though Zola doubts that she'll be able to keep it. Hera reminds that Diana is the queen on Paradise Island, and that Zola must respect that. Tearfully, Zola admits that she does, but that she just wants all of this torment over her son to stop. Artemis confirms that no mortal or god entered the room and took him. Quickly, Diana commands Aleka to form a patrol to search for him on the cliffs.

Soon, Diana finds Dessa with Zeke standing at the edge of the cliffs. Dessa explains that the Amazons are warriors that have existed in a certain way for thousands of years without change. They endure because of that. She is intent on sacrificing the boy to protect that lifestyle. Diana commands Dessa to surrender Zeke, but Dessa refuses, claiming that her act of love for her culture will have to be regarded as one of treason against the new queen.

Diana explains that she does not wish to see the Amazons turn their backs on their way of life, but rather to see it and to open their eyes to what they could become. She warns that for all of the strength of the Amazon society, some of what they are now was born of old weakness. They must grow past those weaknesses, and admit that they are not perfect. Using herself as an example, Diana adds that she is glad to admit that she is not perfect, because from perfection nothing can be made. She begs Dessa again to give up Zeke, intuiting that she doesn't want to kill the boy. Crying, Dessa responds that she never did want to. She passes the boy to Diana begging her to raise him, and make him something the Amazons never had - a man. With that, she leaps from the cliff.

Hurriedly, Diana shoves Zeke into Aleka's arms and dives in after Dessa, who begs not to be saved. Diana responds that she needs love like Dessa's to lead the Amazons to the new age she hopes for - and if failure comes, they will fail together. At the bottom of the cliff, they are surprised to find Hephaestus waiting with Eros and Aphrodite and the sons of Paradise Island. Diana has arranged for all of the male progeny that the Amazons had thrown into the sea for generations come back to the island with the gods' help. Aleka is disturbed, but Zola reminds that men can bring a pleasant kind of madness with them that the Amazons may learn to enjoy.

Suddenly, however, a bloodied and beaten Dionysus bursts through the bushes to warn that Hermes can no longer protect Zola and her son. The First Born grows ever stronger, and Hell has fallen to him.

Retrieved from "https://heykidscomics.fandom.com/wiki/Wonder_Woman_Vol_4_31?oldid=1469362"
Community content is available under CC-BY-SA unless otherwise noted.