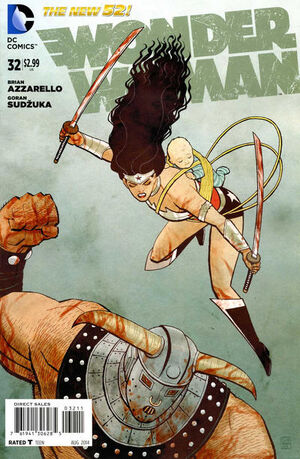 There may be as much to admire as there is to hate about you, woman.

Appearing in "The Beast of Times"Edit

Synopsis for "The Beast of Times"Edit

Having just made the revolutionary move of welcoming the abandoned sons of the Amazons back to Themyscira, Wonder Woman worries that she made a mistake. Unfortunately, her ally in this, Hephaestus cannot offer any advise. It is a move that could change Paradise Island forever.

Since their visit to Hades, Hermes has not returned, and according to Hera, Dionysus barely survived. In the meantime, Artemis and Eros have been sent at Hephaestus' command to fight a war against the First Born's forces, made up of souls stolen from Hades. Artemis and Eros enter Hades to find that the souls whose forms made up the very foundation of the realm are dispersing, and the place is in ruins.

Meanwhile, on Mount Olympus, Strife makes light of the changes that the First Born has made to the seat of the Gods of Olympus' power. Grimly, he warns that she should not be there, lest he slaughter her. As far as he is concerned, none of the old gods are worth the seed spent to make them, whether they are his kin or not. He will kill them all. With a smirk, Strife reminds that Wonder Woman is on her way with an army, intent on taking his throne away. Angrily, he warns that she is not to speak of Wonder Woman disparagingly. She is the only god among all who is worthy to die by his hand. Strife smirks, commenting that if he intends to kill all of the gods, he will have no one to share his glory with. She suggests that if he were to take a wife, he'd have someone to share it with.

Meanwhile, Zola runs afoul of Aleka, who is annoyed that the Amazons have been preparing for war on the account of this mortal woman and her child, Zeke. Wonder Woman interrupts, insisting that they are worth the trouble. For that reason, she bequeaths the shield she was given by Hephaestus to Aleka, stating that she trusts no one more to protect Zola and Zeke - much as Aleka hates them.

Elsewhere, in the domain of Demeter, the goddess feels an unearthly cold wind, and wonders what is the cause. Suddenly, Hermes smashes through the wall, clearly injured. Rushing to his side, she is further startled by the arrival of Cassandra, who has certainly gone mad. Fortunately, this is Demeter's domain, and it is her place of power. She entraps Cassandra in a carnivorous plant, and warns that she will stay there until she becomes food. Unfortunately, Cassandra is followed by her Minotaur. However, she is spared his attack by Artemis and Eros, who were hot on his trail. They are not a match for him, though, and it is at last Wonder Woman who arrives just in time to knock the creature unconscious and protect her friends' lives.

The First Born, though, has come to this domain as well, and intends to bring an end to Demeter's rule over the Harvest, and with it abn end to rebirth. Angrily, Demeter responds that he is merely a nightmare that was born to be killed. Despite her bravado, he drains her of her life, and she loses her resolve. Unperturbed, Diana insists that she will not give up, and sends her companions to safety in the hopes that she can take on the First Born alone, and win. She fires a flaming arrow at him, and as he burns, he drags her into the fire, insisting that she will burn with him.

When Zola sees the others returning, she wonders where Diana is, but no one will tell her. In fact, they fear the worst. With a sudden boom, Orion and Milan arrive, insisting that they can help Diana.

Retrieved from "https://heykidscomics.fandom.com/wiki/Wonder_Woman_Vol_4_32?oldid=1469364"
Community content is available under CC-BY-SA unless otherwise noted.