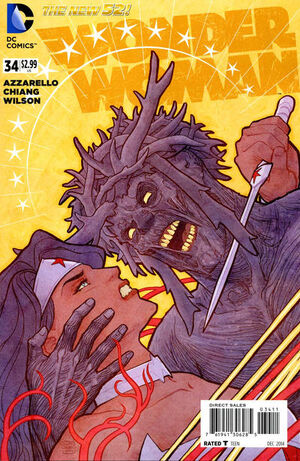 My girl, it's in strife that Amazon mettle is honed.

Having left Wonder Woman for dead on Mount Olympus, the First Born brings war to Themyscira, glad of their resistance, because it justifies his killing them just like he killed their champion.

On Olympus, though, Diana remains alive - if weak, and she lives to see her predecessor as God of War rising from the pool of blood. Sadly, Diana apologizes to her teacher for her failure. Smirking, he responds that staying true to herself is its own victory. Still, he admits that she won't be able to celebrate that victory. She muses that truth is best shared by example, and Ares responds that there is no illusion to truth - but there is a delusion that truth is always good. The First Born, after all, is no less true to himself than she is. Though she is tired, Diana cannot give up her fight, and Ares understands her struggle. Diana's vision fades, and she is surprised to find that she had actually been speaking to Strife.

In Themyscira, Zola has difficulty keeping her son Zeke safe in the melee between the Amazons and the First Born's warriors. She rushes into a hallway, hoping to seek out Hermes, and get them both off the island. Instead, she finds Hera, whom she finds doing nothing to stop or help in the fight below. Hera reminds that her immortality was once again restored to her, and the fight below is now beneath her concern. Angrily, Zola reminds of how they had once been friends, of how she and Diana had taken her in and protected her when her immortality was ripped from her, how she had forgiven Hera for trying to kill her. Hera points out that she had failed to kill Zola. Coldly, Zola leaves Hera, warning that if she cannot die alone, she will certainly live alone, at this rate.

Back on Olympus, Strife mocks Diana by toasting to her failure. She muses that she had, briefly, thought that Diana would win - but now everything is falling apart, and she will at least be assured that the future won't be boring. Sighing, Diana responds that she will die, and in her life's end, she will find peace. Annoyed, Strife insists that Diana should never find peace, and drags her into the pool of blood.

On the island, the First Born finds Orion's persistence in surviving annoying, and insists that if he is going to remain alive, he should put on a collar like a dog. When Orion refuses, the First Born becomes angry - but his cry of rage is cut short when he and his entire army are encased in stone. In that moment, Milan appears, riding Orion's Astro-Harness, and gathers up Orion and Artemis, and carries them away into a Boom Tube.

Strife, meanwhile, drags Diana to the battlefield, dropping her at the stone feet of her mother Hippolyta. Maintaining her mocking tone, Strife explains that she brought Diana to the place she was lied to; to the place she was raised - if only to see it razed. Angrily, Diana punches strife in the face, but the effort causes her to collapse. Concerned, her mother reminds that it is in strife that the Amazons' mettle is honed. She attempts to reconcile for her lies, but she is interrupted by the return of Orion and company on the Astro-Harness - who is surprised at the amount of blood Diana is losing. He attempts to have his harness heal her wounds, but the First Born has already found them, warning that they are surrounded.

Regaining her strength, Diana rises and warns that it is he who is surrounded, as an army of robotic creations begins converging on the city, led by Hephaestus and Eros. Using the distraction, Diana begs her mother to hold the centre of the city, turning next to Milan with a request for help in locating Zola.

Zola, meanwhile, is searching for Hermes in the dark, empty passages of the city, when she realizes that she's being followed by Cassandra and a gang of the First Born's hyena warriors. As she cowers in fear of their impending attack, she is surprised to find that Hera comes to her rescue, turning the Hyenas to crystal, and smashing them. She turns to kill Cassandra, but Diana, having caught up, begs her not to. She explains that Lennox saw good in Cassandra that she yet wants to see. She begs the queen of the gods for the chance to let Cassandra redeem herself. Agreeing, albeit reluctantly, Hera knocks Cassandra unconscious.

Looking down on the battlefield, Diana wonders if it might be time to finally fulfill the prophecy that had so disturbed the other Gods of Olympus - the prophecy of the last born taking the throne of Olympus. It may be time for Zeke to take his place. Hermes takes Diana, Zola, and the baby away, while Orion and Artemis provide a distraction. Before she leaves, Hera offers Diana her thanks, but Diana refuses, offering her own.

Hermes is surprised at the state of Olympus, under the First Born's influence. As Diana takes the baby from Zola to place him on the throne, the mortal woman collapses. From within the pool of blood, a voice comments that this is always what happens when mortals come face to face with the end. Rising from the pool, Poseidon reveals his presence.

Retrieved from "https://heykidscomics.fandom.com/wiki/Wonder_Woman_Vol_4_34?oldid=1469368"
Community content is available under CC-BY-SA unless otherwise noted.