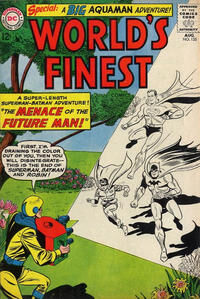 Great guppies! Look, Aquaman -- Those creatures with the glowing head bands are blasting into that dock warehouse with super-powers!

Appearing in "Menace of the Future Man"Edit

Synopsis for "Menace of the Future Man"Edit

Investigating a strangely garbed man digging on a farmers property, Batman and Robin find this strange man digging up a chunk of Kryptonite, the man knowing of the Dynamic Duo from his history books knows that the Dynamic Duo would attempt to prevent him from taking Superman's only weaknesses and uses high tech weapons to keep the heroes at bay while he escapes. Robin rushes to a phone and calls Clark Kent at the Daily Planet and warns him of the potential danger of facing this new foe who has seemingly come from the future.

Sending Robin after the future man, Batman tracks his trail back to a cave where he finds a time sphere that is programmed with two different dates and locations: New Gotham City, in the year 2084 and ancient Norseland circa 522 AD. Robin and Superman meanwhile track the Future Man to the Boy Ranger museum seeking out more Kryptonite. When they attempt to engage their foe, Superman is shocked to find that he is armed with a weapon that fire Kryptonite bullets. The Future Man has the advantage in battle until Batman arrives in his Whirly-Bat and scares the crook off. Tracking him back to his hide out, they arrive too late to stop him.

Knowing that he has escaped to either two points in history, Superman flies through the time barrier to the future while Batman and Robin use Carter Nichols time machine to travel back to the year 522. In the past, Batman and Robin are attacked by Thor who is convinced by the Future Man to attack them. With Batman and Robin knocked out, Future Man steals Thor's hammer (it's "magical" properties come from the fact that it was constructed out of a meteor fragment) and escapes into history, prompting Batman and Robin to return to the present.

In the future, Superman is promptly arrested for "impersonating" himself, a crime in that future era. Convincing the lawmen of this era that he is the true Superman he notes that one of their number a man named John Durr resembles the Future Man. When John abruptly leaves when Superman explains why he has come to the future, he follows after him, and learns that he is really the Future Man's twin brother who has been extorted into letting his brother use a time machine to go back in time to collect Kryptonite fragments. He is downed by the Future Man's minions who have a chunk of Kryptonite they use to weaken the Man of Steel.

In the past, when Future Man returns, having combined Kryptonite and Thor's hammer to make the ultimate weapon, Batman and Robin are ready for him: With robots of themselves and Superman sent after him, Future Man believes that he has killed all three men when he unleashes his weapon. With his guard down, he is easily captured by the Dynamic Duo. Disguising himself as the Future Man, Batman travels to the future and with Robin's help captures Future Man's crooks and rescues Superman. Explaining how they defeated Future Man, the heroes turn him over to John to be put in jail before returning to their own time.

Appearing in "The Creatures That Conquered Aquaman"Edit

Synopsis for "The Creatures That Conquered Aquaman"Edit

Aquaman and Aqualad come upon a band of four green-skinned aliens wearing strange metallic headbands that give them power to project bolts of electrically-based force. The aliens are looting a warehouse, but when the two heroes send whales to block their exit, the outworlders blast the whales aside and are about to do the same to Aquaman when Lador, one of their number, parries their blasts with his own. Lador and Aquaman are taken prisoner by the other aliens and imprisoned in a “cage” of electricity, after Lador’s headband is removed. Lador tells Aquaman that he is from a parallel dimension, inventor of a warp-machine that allows them entry into Aquaman’s world. The alien criminals tricked him into crossing over to Earth to gain elements that would perfect the headbands. When this was done, they declared their intention to loot the Earth. Aqualad diverts the alien crooks’ attention with an assault of sea creatures, then dons Lador’s discarded headband and frees Aquaman and Lador. After some trickery, Aquaman, Aqualad, and Lador strip the villains of their headbands and capture them. Lador destroys the headbands, and tells Aquaman and Aqualad he will take the villains back to his world.

Retrieved from "https://heykidscomics.fandom.com/wiki/World%27s_Finest_Vol_1_135?oldid=1498195"
Community content is available under CC-BY-SA unless otherwise noted.