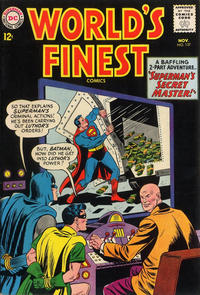 When the Daily Planet gets a report that aliens had landed in Metropolis Park and are seeking Superman's aid, Clark Kent rushes off to change into the Man of Steel to see how he may assist the aliens. They ask him to go to a distant planet where an alien creature threatens their world. Sure enough, Superman deals with the alien threat. While on Earth, Batman and Robin go to Metropolis to cover for Superman's absence and smash up an operation to steal some priceless rugs.

When Superman returns to Earth, he shocks authorities when he starts smashing buildings and tosses a bunch of cops into the ocean with a giant spoon ripped off a silverware manufacturers building. Then the Man of Steel goes on a crime spree, stealing gold and silver items from museums around Metropolis. His thefts attract the attention of Batman and Robin who fail to stop him. Shortly after the spree, Superman would return with no memory of what happened then suddenly lose control again going on another crime spree. Finding something odd, and suspecting something might have happened to him in space. Batman uses his chem-o-detector to track Superman down and he and Robin are shocked to find that he is under the control of Luthor. Luthor and the man seeming to be Superman knock the two partners out and tie them up.

The crime sprees have created an anti-Superman sentiment in Metropolis and when Superman approaches Lois Lane, with no recollection of anything after his mission in space, attempts to help stop a fire and is told to go away. Soon a large advertising campaign asking for Superman to leave Metropolis sweeps the city, and the Man of Steel, completely hurt by the accusations decides to honor the requests of the people of Metropolis and leave the city.

As it turns out, Luthor has been working with the aliens and has been using a Superman robot to commit the crimes that the real Superman has been blamed for. When Batman and Robin break free of their bonds and attempt to escape, Luthor sicks his Superman robot on them. However, before the fake Man of Steel can harm them, the real Superman arrives on the scene and smashes his robotic doppleganger and rounds up Luthor and the aliens. After clearing his name, the people of Metropolis accept Superman back with open arms and he is invited by some firemen to help put out a fire.

Appearing in "The Day That Aquaman Lost His Powers"Edit

Synopsis for "The Day That Aquaman Lost His Powers"Edit

Aquaman and Aqualad are hard-pressed to deal with a band of scuba-diving pirates when a shot of strange fumes from an undersea dragon-urn depletes their super-powers. But a second dose of the fumes restores Aquaman’s powers, and he takes the opportunity to catch the crooks and then restore Aqualad’s powers as well.

Retrieved from "https://heykidscomics.fandom.com/wiki/World%27s_Finest_Vol_1_137?oldid=1470413"
Community content is available under CC-BY-SA unless otherwise noted.