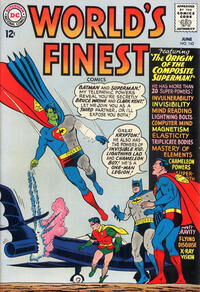 Appearing in "The Composite Superman!"Edit

Synopsis for "The Composite Superman!"Edit

When Bruce Wayne and Dick Grayson go down to the Batcave in order to respond to the Bat-Signal, they are shocked to find a message in the Batcave from some unknown intruder telling the Dynamic Duo that they know all their secrets and orders them to appear at Black Mountain the next day at noon. When Superman visits his Fortress of Solitude, he finds that the Fortress has been entered and a similar note has been left for him to find as well.

Unknown to the heroes is that Composite Superman is in reality Joe Meach, an utter failure in life who wanted nothing more but to be remembered as somebody important. After being saved from a sloppy attempts at attempting to be a record high diver by Superman, Joe would be given a job as caretaker at the Superman Museum. Cleaning up a place that is a homage to the world's greatest super-hero did nothing to change Joe's outlook on life except for the fact that he has become resentful of Superman and Batman's accomplishments. One night while cleaning in a room where trophies of the Legion of Super-Heroes were stored, lightning would strike the trophies and bombard Joe with some strange energy. Amazingly, Joe would gain the powers of all the Legion members. Inspired by his vendetta, he would change his shape into a composite Superman/Batman form and seek to upstage both Superman and Batman.

Their enemy spends the next few days building himself his very own fortress and begins plotting world domination. Finding the location of his fortress, Superman and Batman infiltrate it and face down Composite Superman. Although the villain easily over powers the two heroes, they note that with each attack his powers had become weaker. Noticing this as well, Composite Superman returns to the Superman Museum to once more bombard the Legion statues with lightning in an attempt to restore his powers. However, he arrives too late and his powers wear off entirely. Finding that his memory of his experiences as Composite Superman fading, Joe attempts to write it down but doesn't finish in time to provide a full explanation. Later, with his memory of his experiences entirely gone, Joe would come across the half-finished message and wonder what he was trying to communicate and decide to keep the note for the time being. Meanwhile, Superman and Batman give up their search for Composite Superman, finding that he has disappeared for the time being.

While in his Fortress of Solitude, Superman realizes that if someone were to break in, they would learn not only his secret identity but those of Supergirl, and his associates Batman and Robin. He then rigs a special security system that would detonate the statues should someone break in. Later in his guise of Clark Kent, Superman is sent on assignment to Lois Lane to the Metropolis Space Exploration Convention where somebody has claimed to have captured a space beast. Sure enough, the story proves to be true, and Clark recognizes it as a Kryptonian flame beast. The creature suddenly attacks, using it's flame breath on Clark Kent, burning off his civilian clothing and revealing his Superman costume underneath.

The dragon being a larger concern than his revealed identity, Superman goes after the beast, however during his battle with it, the creature swallows a Red Kryptonite meteor. Knowing that it will eventually effect the fire-beast, and keeping his distance from it so as not to be effected by the Kryptonite himself, Superman leads the beast on a chase, utilizing it's flame breath to carry out good deeds. When the Red Kryptonite finally effects the fire-beast, stripping it of it's powers, Superman freezes it with his super-breath and throws it out into deep space, he then begins planning a scheme to once more fool Lois into doubting her belief that Superman is really Clark Kent.

When Lois returns to the scene of the fire-beasts attack to find proof that Kent is really Superman, she finds that Clark is being bandaged up by a doctor and a nurse. He feeds her a story about how he only suffered minor burns and flagged down an ambulance from Gotham City to give him medical treatment. Since nobody was looking when the flames struck Clark, Lois ends up believing this story and the doctors assessment that Clark will need to wear his bandages for a week and takes Clark home. Changing back to Superman, he returns to the scene and meets up with the "doctor" and the "nurse", who turn out to really be Batman and Supergirl, whom Superman had called (with an assist from Krypto) to cover for him once more.

Retrieved from "https://heykidscomics.fandom.com/wiki/World%27s_Finest_Vol_1_142?oldid=1470424"
Community content is available under CC-BY-SA unless otherwise noted.