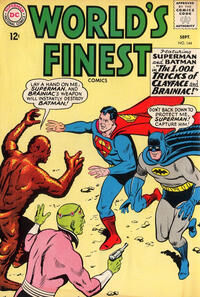 Appearing in "The 1,000 Tricks of Clayface and Brainiac!"Edit

Synopsis for "The 1,000 Tricks of Clayface and Brainiac!"Edit

Brainiac has returned to Earth to get revenge against his hated foe Superman. On his way to Metropolis, he blasts opens a wall of a prison allowing criminals incarcerated inside to escape. Among them is Matt Hagen, the criminal known as Clayface, the crook decides to go to one of his secret labs so that he can once more regain his powers. Brainiac arrives in Metropolis and lands his ship on the roof of the Daily Planet attracting the attention of Superman and Jimmy Olsen. When Jimmy confronts Brainiac first, he is blasted with the villains Kryptonite cannon peppering him with fine Kryptonite particles that weaken Superman. As Brainiac escapes, Superman realizes that Jimmy is a hazard to him until the effects of the weapon wears off and chases after Brainiac to Gotham City.

In Gotham, Matt Hagen once more makes the synthetic compound that allows him to become Clayface for the next five hours. When Superman and Jimmy arrive in Gotham City, they propose that they and Batman and Robin trade sidekicks. Giving Robin his signal watch, Jimmy teams up with Batman who trusts Jimmy with his and Robin's secret identities. As Jimmy helps Batman try and tackle Clayface, Superman and Robin attempt to capture Brainiac. However, the young men are not accustomed to working as the side kicks to other heroes and the two bungle attempts at capturing the crooks. While Superman and Batman are understanding of the circumstances, Jimmy and Robin are hard on themselves for fowling up so easily.

When Clayface challenges Batman to battle him at the cornerstone ceremony for the new Gotham Arts Center, Clayface manages to capture Jimmy and escape into the woods. There he happens upon Brainiac's spaceship, spotting Jimmy in the custody of Clayface makes him realize why Superman is working with Robin and decides to team-up with Clayface. As the two are plotting to use Jimmy to lure Superman into a trap, Robin manages to switch places with and disguise himself as Jimmy. Falling for this ruse, and with Superman playing possum when he is "effected" by the "Kryptonite", Superman and Robin manage to capture Brainiac while Clayface attempts to escape. He is captured shortly thereafter by Batman and Jimmy when his formula worn off. With the effects of the Kryptonite cannon having warn off, the side-kick exchange ends and the two young men joke about how they wouldn't want to trade roles ever again.

Appearing in "The Manhunt On Land!"Edit

Synopsis for "The Manhunt On Land!"Edit

One day two prisoners, "Shark" Norton and Horace "The Wizard" Kates, who were both locked up by Aquaman and Green Arrow respectively, are plotting a break out. Both deciding to change their crime methods, "Shark" decides to become a land pirate, while "The Wizard" takes performing his robberies at sea. The two crooks successfully escape, and the authorities begin their search for them.

Days later a naval ship finds Aquaman at sea and asks him to aid in capturing the "Shark" on the main land explaining that Green Arrow has already started his manhunt for "The Wizard". Dawning a special water filled sea helmet (So that he doesn't remain out of contact with water for an hour) and a large sea-tank full of his friends from the deep, Aquaman arrives at police headquarters a week later to help the police out. During one of Aquaman's patrols of the city he is attacked by a number of the "Shark's" thugs, but they are easily captured with the help of his sword fish. Throughout the day, Aquaman begins to bust up the "Shark's" gang, even stopping some of them from escaping in a hot air balloon. Sick of Aquaman's interference, the "Shark" holds the sea life in the local aquarium hostage to get Aquaman to surrender. Entering the aquarium, Aquaman tricks the "Shark's" goons into breaking the glass of the aquarium tanks, allowing the sea-life inside to break free and quickly take out the gang, who are all promptly arrested. With the "Shark" and his gang busted up, Aquaman returns to the sea wondering how Green Arrow fared against "The Wizard."

Retrieved from "https://heykidscomics.fandom.com/wiki/World%27s_Finest_Vol_1_144?oldid=1470428"
Community content is available under CC-BY-SA unless otherwise noted.