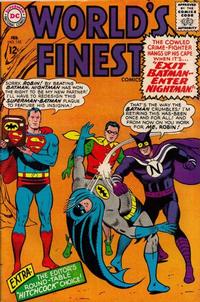 Sorry, Robin! By beating Batman, Nightman has won the right to be my new partner!

Appearing in "The 1,000th Exploit of Superman and Batman!"Edit

Synopsis for "The 1,000th Exploit of Superman and Batman!"Edit

As Superman and Batman approached their 1,000th case together, Batman claimed that he wasn't worthy of the festivities in his honor. He felt that he had failed as Superman's partner, due to the latter's teaming with a mysterious new crime-fighter: Nightman. Superman suggested that Batman should try to solve the mystery of Nightman's identity. Robin further suggested that he could be "a sinister figure, pretending he's against crime to further some plot of his own!". Gordon gave him seven days to come through.

Over the next week, Batman works without sleep to determine Nightman's identity.

As it turns out, Nightman is in fact ... Bruce Wayne. Superman had hypnotized his friend into assuming the Nightman identity at night to give Batman a challenging case to solve, as thanks for all he's done.

Appearing in "The Mask of Fear"Edit

Synopsis for "The Mask of Fear"Edit

Retrieved from "https://heykidscomics.fandom.com/wiki/World%27s_Finest_Vol_1_155?oldid=1511543"
Community content is available under CC-BY-SA unless otherwise noted.