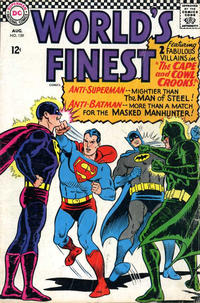 Appearing in "The Cape and Cowl Crooks!"Edit

Synopsis for "The Cape and Cowl Crooks!"Edit

A gas from an overturned bottle in the Fortress of Solitude turns the visiting Commissioner Gordon and Perry White into evildoers. They rejuvenate themselves with a special serum, charge Perry’s body with super-energy, and oppose their former friends Superman and Batman as Anti-Superman and Anti-Batman.

Appearing in "Case of the Error Clown"Edit

Synopsis for "Case of the Error Clown"Edit

Retrieved from "https://heykidscomics.fandom.com/wiki/World%27s_Finest_Vol_1_159?oldid=1526957"
Community content is available under CC-BY-SA unless otherwise noted.