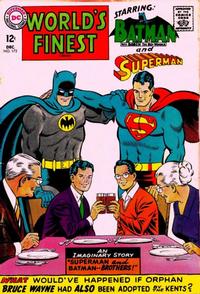 Appearing in "Superman and Batman... Brothers!"Edit

Synopsis for "Superman and Batman... Brothers!"Edit

When Bruce Wayne's parents are murdered, he is adopted by Jonathan and Martha Kent, so that Clark can have a brother.

Clark notices that sullen Bruce excels in school, but isn't at all afraid to stand up to a bully - and beat him! He also discovers that Bruce is studying criminals and suspect that he has become one.

One night, he sees Bruce dressed as a creature of the night. Confronting him, Clark is knocked to the ground - by a piece of kryptonite from Bruce's utility belt. Bruce explains that he is not a criminal, but a crime-fighter, using a bat costume to strike fear in the hearts of criminals. Together they team-up to fight crime in Smallville.

When Bruce turns 21, he inherits his father's full estate and the entire Kent clan moves to Gotham City. There, Batman and Superman continue their crime-fighting careers.

One day, a new villain appears - Lex Luthor. He is, of course, defeated. When he escapes from prison, he vows to destroy his enemies.

Kidnapping Ma and Pa Kent at random, Batman risks his life to save them from a deathtrap. Fazed by Batman's determination and ability to survive a series of deadly traps that would easily kill a normal man, Luthor detonates his bomb and kills the Kents. Batman loses control and, if not for the timely arrival of the police, would have beaten Luthor to death.

Overcome with the grief of losing yet another set of parents, Batman expresses his desire to retire from fighting crime. Superman wisks his friend, and brother, to the 30th Century. There, Batman joins the Legion of Super-Heroes and continues the battle. Superman remains as Gotham's defender in the 20th Century.

Retrieved from "https://heykidscomics.fandom.com/wiki/World%27s_Finest_Vol_1_172?oldid=1470479"
Community content is available under CC-BY-SA unless otherwise noted.