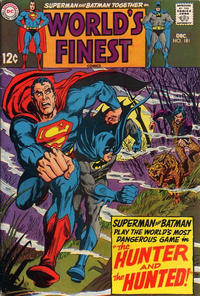 Appearing in "The Hunter and the Hunted!"Edit

Synopsis for "The Hunter and the Hunted!"Edit

Superman and Batman are forced to go to the future oval-shaped world of Orr and are feted as its “founders”. They discover that Orr is actually the changed Htrae, world of the Bizarros, and that its normal-looking human inhabitants are really the evolved descendants of the Bizarro people.

Appearing in "The Origin of the Bizarro World"Edit

Synopsis for "The Origin of the Bizarro World"Edit

When an experimental duplicator ray was used on Superman, an imperfect duplicate known as Bizarro was created. A Bizarro duplicate of Lois Lane was also created to keep Bizarro company. The couple left Earth and founded Bizarro World, a planet populated by duplicates of themselves created with an imitator machine. The Bizarro planet was changed into a cube shape, and the Bizarros adopted a code to do the opposite of all Earthly things.

Clark Kent is mentioned as having won Reporter of the Year in the main story.

Retrieved from "https://heykidscomics.fandom.com/wiki/World%27s_Finest_Vol_1_181?oldid=1470497"
Community content is available under CC-BY-SA unless otherwise noted.