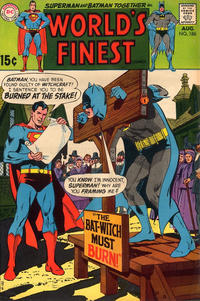 Appearing in "The Bat Witch!"Edit

Synopsis for "The Bat Witch!"Edit

An anonymously-donated bust of Mad Anthony Wayne, the famed Revolutionary War general, resembles Bruce Wayne to an astonishing degree. Superman takes himself and Batman back in time to the American Revolutionary War. There they save a woman accused of witchcraft from being drowned on a ducking stool. But Superman later frames Batman for witchcraft, sees him placed in stocks, assents to have him sentenced to burning at the stake, and prevents Benjamin Franklin from freeing him.

Also: Johnny Quick and his Magic Formula (the King of Speed) (appeared in More Fun And Adventure Comics from 1941 to 1954. Johnny Chambers, news cameraman, possessed the secret of a magic formula for speed, which he used in his heroic identity. Here, from Adventure #202 (July 1954), is one of this most puzzling adventures… “The HUMAN HOT-RODDERS!” (“Bull” Barton (“Executed” in this issue), Tubby Watts)

Retrieved from "https://heykidscomics.fandom.com/wiki/World%27s_Finest_Vol_1_186?oldid=1470505"
Community content is available under CC-BY-SA unless otherwise noted.