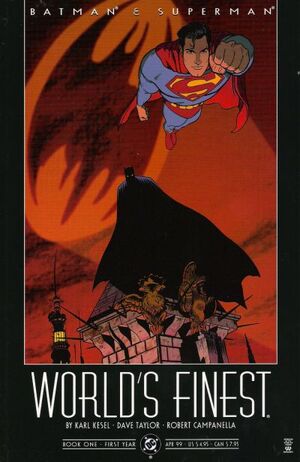 Appearing in "Year One: Different Worlds"Edit

Synopsis for "Year One: Different Worlds"Edit

In Gotham City, Batman foils a robbery. In Metropolis, Superman foils a robbery. At the Daily Planet, Editor-in-Chief Perry White, tells Clark Kent he has been invited to attend the opening of a reconstructive surgery center in New York. Bruce Wayne also attends the opening. Kent and Wayne meet at the center. Harry Harrison announces at the opening that he is retiring. Backstage a man with a gun kidnaps Harrison and heads out the back door. Batman and Superman appear and foil the kidnapping. They meet up afterward and Superman tells Batman the goon he captured mention the Independent Citizens Militia. Batman tells Superman the ICM broke out Eric Stang, a serial killer, in Gotham City. Batman tells Superman he wants to handle things alone and is not interested in being part of a team. Superman comes alone anyway. The two handily defeat Stang's henchmen and Stang grabs Dr. Grey, holding him hostage. They approach Stang, who is holding a deadman's switch to a bomb he planted in the building. Superman tells Stang, he has already defused the bomb. At the same time, Batman tells Stang he is jamming the detonator. Stang releases Grey and jumps out the window. Batman and Superman both go after Stang and rescue him from the fall. While they are arguing with one another about two heroes capturing Stang being overkill, Grey is running for his life and is hit by a truck and killed. Clark and Wayne attend the funeral. Clark tells Wayne that if Batman and Superman had worked together, perhaps Grey would still be alive. Wayne agrees.

Retrieved from "https://heykidscomics.fandom.com/wiki/World%27s_Finest_Vol_3_1?oldid=1470775"
Community content is available under CC-BY-SA unless otherwise noted.