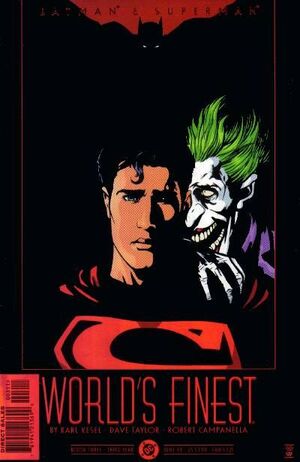 What's wrong, is you assumed I'd be your backup just because it's the anniversary of Harrison Grey's death! You act like we're partners, or friends!

Appearing in "Year Three: Light in the Darkness"Edit

Synopsis for "Year Three: Light in the Darkness"Edit

A man dressed as Superman tries to thwart a crime by a criminal named Illuminata. He is nearly killed in the process. Gotham P.D. takes down the criminal, and the "Superman" is sent to Arkham Asylum. That night, Illuminata appears at Arkham and frees "Superman" and the other inmates. It turns out that "Superman" really is Superman and he immediately sets about rounding up the inmates of Arkham. Batman shows up and helps Superman capture many of the inmates. Then they realize that they still have not accounted for the Joker. Working together they catch the Joker and Superman tells Batman he came to Arkham to write an expose for the Daily Planet.

Retrieved from "https://heykidscomics.fandom.com/wiki/World%27s_Finest_Vol_3_3?oldid=1470779"
Community content is available under CC-BY-SA unless otherwise noted.