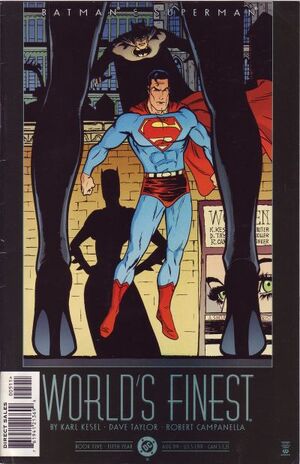 You think the law matters to the 100? They'll bribe or blackmail their way out! They'll kill anyone who gets in their way! Good people! Cops! Fathers!

Batgirl is in the midst of foiling a burglary when Superman shows up and lends a hand. Batgirl and Superman determine that the burglars are members of a Metropolis gang known as the 100. Batgirl suggests the two of them team up to solve the case. Meanwhile, Thorn breaks up a criminal deal by a group of 100 gang members. She is knocked down by one of the gang members and they tie her wrists. Thorn manages to escape, and the lights in the warehouse go out. Batman starts taking out gang members. Batman and Batgirl arrive to find that they've missed the action.

Retrieved from "https://heykidscomics.fandom.com/wiki/World%27s_Finest_Vol_3_5?oldid=1470783"
Community content is available under CC-BY-SA unless otherwise noted.