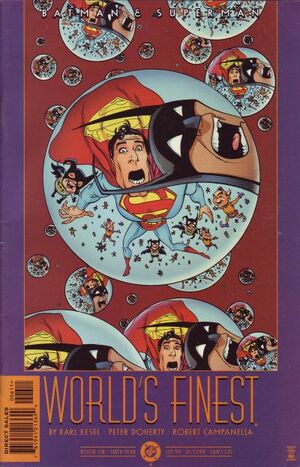 But I have yet to begin to shenanigan! And I shall shenanigan again and again!

Mr. Mxyzptlk is in Metropolis and he meets up with Bat-Mite. The two imps argue over who is better, Superman or Batman, and the two decide to prove which one is best. Bruce Wayne is visiting Clark Kent at the Daily Planet, when suddenly, time stops except for Wayne and Kent. Bat-Mite and Mxyzptlk appear and vanish Kent and Wayne's civilian clothing, replacing it with their respective costumes. The two imps tell the heroes about their wager and tell them once a winner is declared they will restore reality. Batman and Superman race to save Lois Lane and both arrive at the same time. Next, the imps put the heroes in a fun house maze. The first to find his way out, wins the contest. The heroes find the exit at the same time. Mxyzptlk becomes frustrated, says his name backwards and disappears. Reality is restored and Kent sees Wayne off.

Retrieved from "https://heykidscomics.fandom.com/wiki/World%27s_Finest_Vol_3_6?oldid=1470785"
Community content is available under CC-BY-SA unless otherwise noted.