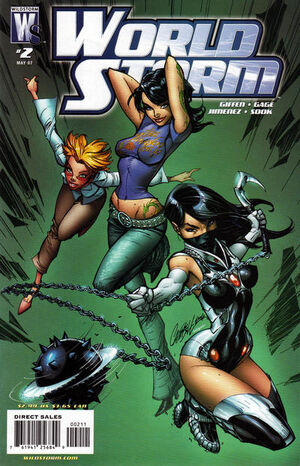 As Voodoo cleans up after killing a militia leader deep in Africa, she ponders why she has this dark side to her. She remembers her relationship with Jeremy Stone (aka Maul) and how she knew it wouldn't last. She knew that when Jeremy found out she killed people every now and then that he wouldn't understand. So, what she considered inevitable happened which was the two split up.

She reviews with herself how easy it is to get into the minds of those she thinks deserve to die for their crimes. As she takes us back through the events that led to the militia leader, she reveals a deeper and darker agenda at work. She kills these people not only because they deserve it but also because she likes it.

At Stormwatch Plaza, home of Stormwatch Prime headquarters, Savant and Jet teleport and infiltrate the building. Savant only stays long enough to get Jet situated and then teleports out before Stormwatch's security systems identify her. For Jet, on the other hand, Savant has used the fact that Marc Slayton (Backlash) is her father in order to fool the security system into thinking Jet is really him. The computer, however, is not fooled.

Jet's mission is to steal some files and erase any information Stormwatch has on the two of them. But Diva catches Jet and attacks. Jet is able to fend off Diva but then runs into Fuji. She's able to fend off Fuji as well but then Winter catches up with her. Jet is able to escape him by claiming he touched her boob and that she's underage. An embarrassed Winter backs off but then Jet tells him she was lying and takes him down. Savant finally is able to teleport Jet away.

Jackson King is stumped as to who attacked them and what they were after.

Meanwhile, Jet returns all the information to Savant. She tells Savant she's decided to adopt her father's codename and to start calling her Backlash.