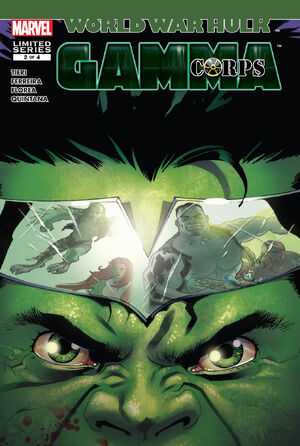 While the rest of the Gamma Corps fights a LMD of the Hulk in preparation of their real confrontation, Mess attempts and fails to go AWOL from the unit. A series of flashbacks reveals the motivation behind the members of the Gamma Corps: each member is motivated out of revenge against the Hulk. Mess's blamed the Hulk when a truck landed on her minivan, killing her Children. Prodigy's parents blamed their son's autism on the Hulks rampage through a hospital they had been at. Gideon Wilson blamed the Hulk for the death of his son, who ran away from home to follow the Hulk around New Mexico. Eliot Franklin blamed the Hulk for sending him to prison for his part as the Clown in the Circus of Crime. General Ryker experimented on each subject, giving them gamma powers that would enable them to battle the Hulk when the time came.

Meanwhile, in the present, that time having come, General Ryker launches a missile towards the Hulk's spaceship in a frontal assault.

Retrieved from "https://heykidscomics.fandom.com/wiki/World_War_Hulk:_Gamma_Corps_Vol_1_2?oldid=1640948"
Community content is available under CC-BY-SA unless otherwise noted.