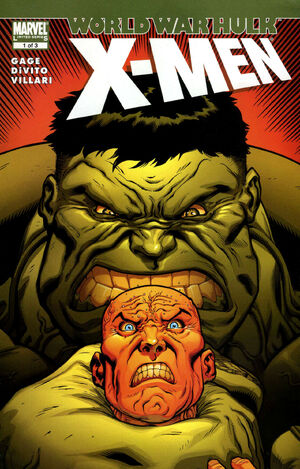 When the Illuminati voted to shoot the Hulk into space, Professor X wasn't there...but the Hulk just found out he was supposed to be. So he shows up at the Xavier Institute to ask a few pointed questions, Hulk style. With the other teams away, only Beast and the New X-Men stand between the massive rage of the Hulk and the Professor...not to mention the younger students who'd be caught in the crossfire. Can the X-Men-in-training survive the wrath of the Jade Giant until the other X-teams get back? Or will the young mutants become casualties of the World War Hulk?

Retrieved from "https://heykidscomics.fandom.com/wiki/World_War_Hulk:_X-Men_Vol_1_1?oldid=1765284"
Community content is available under CC-BY-SA unless otherwise noted.