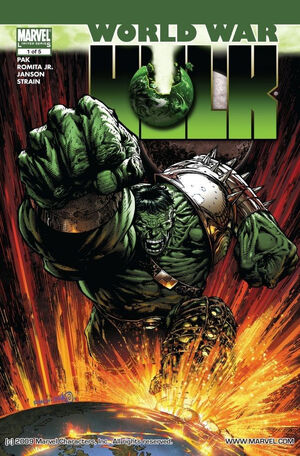 I didn't come here for a whisper. I wanna hear you scream.

The Hulk is standing astride the prow of an alien space vessel en route to Earth. The vessel passes through an asteroid belt, and the Hulk pummels at the asteroids with his huge fists. Before arriving on Earth, he stops at the Blue Area of Earth's moon. Standing before him is Black Bolt, one of the Illuminati members responsible for Hulk’s exile and his wife, Medusa. The Hulk charges him, but Black Bolt grabs his wrist and whispers, "Enough". The sonic waves generated from Black Bolt's voice propel the Hulk backwards, burrowing a scar into the moon’s surface. Black Bolt turns to walk away, but the Hulk rises stating, "I wanna hear you scream". He lunges after the Lord of the Inhumans.

The fight causes such intense damage to the moon's surface, that the geological upheaval is picked up by Earth's satellite relay stations. The President is alerted and S.H.I.E.L.D. agents are mobilized.

The Warbound craft appears in the sky over Times Square. The Hulk projects a large hologram message, demanding that everyone has twenty-four hours to evacuate the city. The only people who are to remain are Doctor Strange, Iron Man and Mister Fantastic – all members of the Illuminati. If the Illuminati members fail to appear, then the Hulk will destroy the entire city.

As the Warbound craft heads back out into space, Iron Man taps into the satellite network and follows their trail. The Warbound fire an electro-magnetic pulse that fries the satellites, and the resulting feedback channels back into Tony's armor. Doctor Strange appears before him in astral form, and asks Tony if the Hulk was strong enough to overpower Black Bolt, then why did he think that his "machines" would fare any better?

Iron Man returns to Earth and meets up with Reed Richards. Together, they take the Fantasticar to northern Vermont to consult with Robert Reynolds – the Sentry. Their hope is that the Sentry's past relationship with the Hulk might be strong enough to help calm him down. Reynolds switches into his Sentry costume and volunteers to help out.

As the streets are emptied, the Hulk's deadline expires and the Warbound vessel returns to New York. Iron Man arrives, now wearing a modified version of his Hulkbuster armor. The two engage in a massive fight, sending shock-waves that smashes out every window of every skyscraper in Manhattan. Helicopters are blown off course, and nobody can even get near them. As the two grapple, Iron Man manages to inject the Hulk with nanobots designed to suppress his enhanced strength. Driving him into the ground, Tony orders an air strike against the injured Hulk. As the missiles strike, the Hulk experiences flashbacks of the bomb that killed his beloved Caiera Oldstrong. The nanobots fail to slow the Hulk down and he is more enraged than ever. He dives into Iron Man and the two sail through the skyline, plowing through Avengers Tower. The structural integrity of the tower is damaged so severely that it eventually collapses. Only the Hulk emerges from the wreckage.

Retrieved from "https://heykidscomics.fandom.com/wiki/World_War_Hulk_Vol_1_1?oldid=1486502"
Community content is available under CC-BY-SA unless otherwise noted.