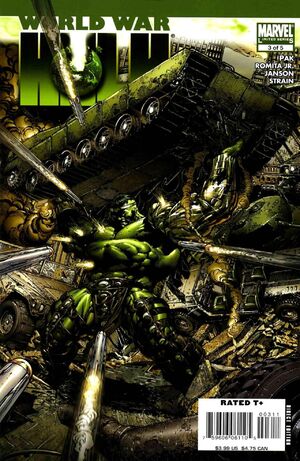 Her name was Caiera. And I hear her voice all the time

The all-out military attack lead by General Ross allows Doctor Strange to enter the Hulk's mind, immobilizing his body. In the plane of Hulk's mind, Strange manages to calm the Hulk, whose appearance changes to that of Bruce Banner momentarily. However, when Strange lowers his guard, Hulk reappears and crushes his hands. This crushes Doctor Strange's hands in the real world and allows Hulk to control his physical body once more. Hulk resumes the attack and takes down General Ross.

Meanwhile, the president pleads futilely with Sentry to intervene and stop the Hulk. The Hulk himself seems to be preparing a makeshift coliseum out of Madison Square Gardens. Nearby, Rick Jones is attempting to enter Doctor Strange's Mansion. Elloe Kaifi and Hiroim arrive and easily gain access. Iron Fist, Ronin and Echo confront them but are quickly defeated and fitted with obedience disks. Doctor Strange prepares to unleash a creature known as Zom while Hiroim searches for him.

At Madison Square Garden, Rick Jones begs to Hulk to see reason. Just as Miek threatens to kill Jones, Doctor Strange arrives with the unconscious body of Hiroim. Strange has invoked the power of the demon, Zom, in order to confront the Hulk.

Retrieved from "https://heykidscomics.fandom.com/wiki/World_War_Hulk_Vol_1_3?oldid=1495054"
Community content is available under CC-BY-SA unless otherwise noted.