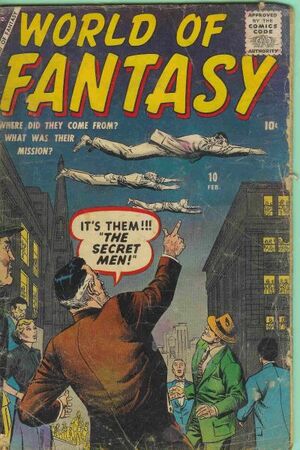 Appearing in "I Went Through The Veil!"Edit

Synopsis for "I Went Through The Veil!"Edit

A woman of the far future draws a man out of the past through the veil of time travel to be her mate. One of her fellow futurians sends him back and admonishes her that she knows people from the past must remain in the past. He explains that they live so far in the future that all possible combinations of appearance have been exhausted and that is why she looks just like the past man's wife and she will fall in love with a futurian who looks like that man in the past did.

Appearing in "The Silent Street"Edit

Synopsis for "The Silent Street"Edit

A police officer makes his night rounds thinking that nothing interesting ever happens in the neighborhood while two aliens are conducting a life or death struggle among the rooftops.

Appearing in "The Secret Men"Edit

Synopsis for "The Secret Men"Edit

An expedition to a mountain top city filled with superman possessing the power of levitation is thwarted by one of their number who has infiltrated the expedition as leader and wishes the mountain top city's existence to remain a secret. He convinces the others to turn back by leaping into a crevice, while pretending to attempt a crossing, and using his levitation powers until the other members of the group decide the city is only a false story and head back.

Appearing in "The Last Stop"Edit

Synopsis for "The Last Stop"Edit

A driver feels guilty for not stopping to help a man he hits and so each successive day the truck he drives parks itself in front of a cemetery. He confesses to the police and the mechanics who check his truck inform him that the engine comes from a hearse so it was merely force of habit that the truck went to the cemetery every day.

Appearing in "The Mystery Of The Smiling Man!"Edit

Synopsis for "The Mystery Of The Smiling Man!"Edit

Synopsis for "The Books That Were Alive"Edit

A space Book Mobile accidentally drops some books where a hiker finds them and has realistic adventures by using them.

Retrieved from "https://heykidscomics.fandom.com/wiki/World_of_Fantasy_Vol_1_10?oldid=1473077"
Community content is available under CC-BY-SA unless otherwise noted.