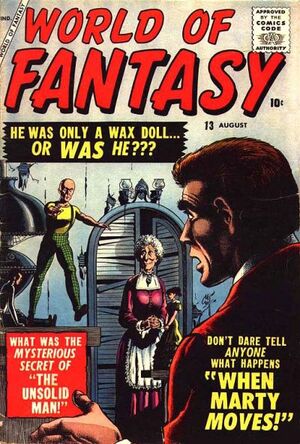 Appearing in "The Unsolid Man"Edit

Synopsis for "The Unsolid Man"Edit

A commie agitator flees the authorities on a rocket sled that is so fast it outdistances time and briefly allows him to him to walk through walls until time catches up with him.

Appearing in "What Happened On the Mountain!"Edit

Synopsis for "What Happened On the Mountain!"Edit

A Tibetan monk sells two partners a mountain loaded with uranium that has two peaks. He tells them they must remain friends or the partner that turns evil will find his half of the mountain has disappeared. They agree to this demand, but one of the men thinks the old monk is touched and plans to betray his partner by throwing away his climbing equipment so he will not be able to return to the village below. The good man does make the climb successfully as though some supernatural agency were assisting him, but when he reaches bottom, he sees that the evil man has been trapped as his lower half of the mountain has now disappeared.

Appearing in "The Man In The Cyclotron"Edit

Synopsis for "The Man In The Cyclotron"Edit

An accident in a cyclotron gives a man knowledge of future weaponry. When he shares this knowledge with political authorities the country is put on a war footing and his sons are drafted, causing him to have misgivings. He reverses the accident which gave him his abilities and destroys the weapon plans.

Appearing in "The Chance I Took!"Edit

Synopsis for "The Chance I Took!"Edit

Aliens convince a cereal manufacturer to dope his product with a chemical that will make humans unaggressive and then tell him they will return in one year with a fleet to welcome them into the galactic federation. The man doesn't eat any of his own cereal, so when the fleet shows up, he wonders if the aliens haven't tricked him in order to allow an Earth conquest of docile humans?

Appearing in "The Mysterious Inheritance"Edit

Synopsis for "The Mysterious Inheritance"Edit

A man finds that instead of inheriting money from his rich uncle, he has inherited his ancestor's supernatural powers.

Appearing in "When Marty Moves"Edit

Synopsis for "When Marty Moves"Edit

A lonely old woman brings home a doll that moves and talks. Her neighbor decides to make a buck off it and gets it to steal for him. When the doll tells the woman what happened, she tells the doll that what he had done was wrong and not to do it again, so the neighbor attempts to make off with the doll. During the scuffle, the woman knocks over the table lamp and the apartment catches fire. The doll bites the man so he lets go of him and returns to the burning apartment to drag the woman out while the man is detained by the firemen who arrive. The spark of life within the doll seems to have been exhausted by the effort of saving her but she keeps it with her for the rest of her days.

Retrieved from "https://heykidscomics.fandom.com/wiki/World_of_Fantasy_Vol_1_13?oldid=1473080"
Community content is available under CC-BY-SA unless otherwise noted.