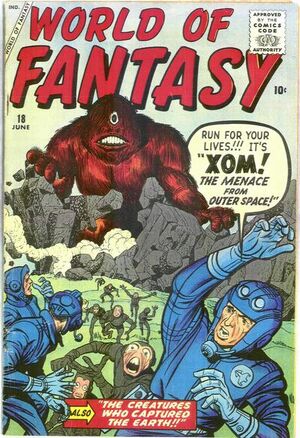 Appearing in "The Creatures Who Captured Earth!"Edit

Synopsis for "The Creatures Who Captured Earth!"Edit

1 of 2
Add photo
Aliens arrive on Earth bearing gifts to make people's lives soft and easy in order to make them ripe for conquest.

Appearing in "The Clock Strikes Never!"Edit

Synopsis for "The Clock Strikes Never!"Edit

A time machine story. The first five pages set up what appears to be an endless loop of events for the inventor, however Fate, the narrator, seems to indicate in the last panel that the inventor has a choice to change things.

Appearing in "To Build A Robot!"Edit

Synopsis for "To Build A Robot!"Edit

A young engineer attempts to acquire funding from a wealthy industrialist in order to build an android. The industrialist is revealed to be such a creature who dissuades the young man in order to discourage competition from other androids.

Appearing in "The Man Who Talks to the Stars!"Edit

Synopsis for "The Man Who Talks to the Stars!"Edit

A reporter interviews a man in the park who claims to be able to speak with star-faring civilizations. The reporter thinks he's a crank, but the man becomes puzzled, checks his Handy Cosmic Tourist Guide, realizes he's made a mistake by stopping off at a primitive off-limits planet and so departs. I wonder if Douglas Adams read this story as a kid?

Appearing in "Xom! The Menace From Outer Space!"Edit

Synopsis for "Xom! The Menace From Outer Space!"Edit

Earthmen land on a planet to be greeted by aliens who claim they are threatened by a creature named Xom enclosed behind a large wall. Eventually the aliens are revealed to be space pirates who wished Xom destroyed in order to sell the ivory in his teeth, and Xom in reality is quite harmless.

Retrieved from "https://heykidscomics.fandom.com/wiki/World_of_Fantasy_Vol_1_18?oldid=1473085"
Community content is available under CC-BY-SA unless otherwise noted.