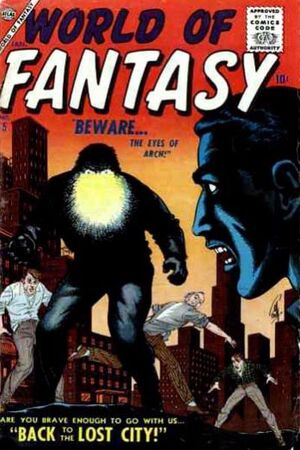 A man desires his cousin's wife-to-be so he uses a time machine to go five years into the future and frame him for a crime he didn't commit by dropping his wife's picture at the scene as incriminating evidence. When he returns to the present day, the woman breaks off the engagement and tells him she loves him.

Appearing in "The Man Who Plunged!"Edit

Synopsis for "The Man Who Plunged!"Edit

A man learns that he has to work for what he wishes.

African natives see a white man parachute from a plane and consider him a bird-god. They take him to a cliff and expect him to leap off and fly.

A thief thinks his victim has cursed him to shrink when he tries to hide in a hothouse of plants enlarged by genetic engineering.

Appearing in "Back To The Lost City!"Edit

Synopsis for "Back To The Lost City!"Edit

Two men experience a mirage in the desert and are later found and brought to a hospital to recover. One of the men recovers first and finds a necklace in the table next to the other and figures that the mirage was actually a real city filled with emeralds. He leaves the hospital and the doctor tells the recovering patient that he left a necklace of glass emeralds for his wife in his room.

Appearing in "Beware the Eyes of Arch!"Edit

Synopsis for "Beware the Eyes of Arch!"Edit

A cleaning lady plays a practical joke on a man who thinks he has discovered the power of Medusa by placing a stone canary in the bird cage. He thinks he has turned the bird into stone by glancing at it, so he attempts to rob the bank and is arrested.

Retrieved from "https://heykidscomics.fandom.com/wiki/World_of_Fantasy_Vol_1_5?oldid=1473072"
Community content is available under CC-BY-SA unless otherwise noted.