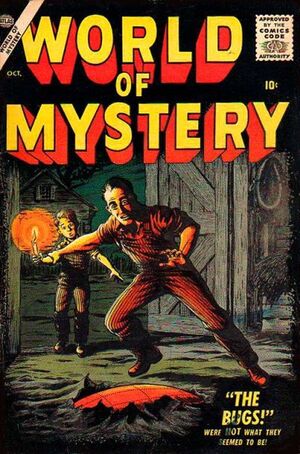 same plot as The Twilight Zone's "The Invaders"

Appearing in "Who is Raymas?"Edit

Synopsis for "Who is Raymas?"Edit

A woman in a Communist country creates the illusion of a man to take suspicion off of her efforts as a magician to disrupt the government's war production effort.

Appearing in "The Mystery Man!"Edit

Synopsis for "The Mystery Man!"Edit

A government agent investigates a lecturer promoting a theory of cosmic harmony because the believers are contributing large sums of money to the man. When the agent convinces the lecturer to disband the group, some in the crowd are angered and they jostle the agent so that the gun he keeps in his shoulder holster goes off. The lecturer reveals himself as a being from another dimension, heals his wounds with but a touch, and disappears vowing to return when men no longer place a monetary value on his message of cosmic harmony.

Appearing in "I Received Letters from Nowhere!"Edit

Synopsis for "I Received Letters from Nowhere!"Edit

An antique dealer sells mail boxes that he drops letters into requesting ten dollars for advice on making money. He is arrested for fraud, but one of the boxes he sold actually did provide wealth-producing letters for its buyer.

Appearing in "The Man Who Failed!"Edit

Synopsis for "The Man Who Failed!"Edit

An inventor thinks himself a failure because his previous attempt was to build a machine that traveled through space and now this machine was to go through time, but all it did was produce a wrenching sensation and deposit him in front of normal people. He doesn't realize that the machine actually worked to transport him through space and time to Pluto's past where the civilization there is similar to present day Earth.

An alien from another dimension is asked by his fellows to make the sacrifice of taking a pill that transforms him into a human so that the humans who are investigating his strange appearance will not be motivated to discover his origins.

Retrieved from "https://heykidscomics.fandom.com/wiki/World_of_Mystery_Vol_1_3?oldid=1473089"
Community content is available under CC-BY-SA unless otherwise noted.