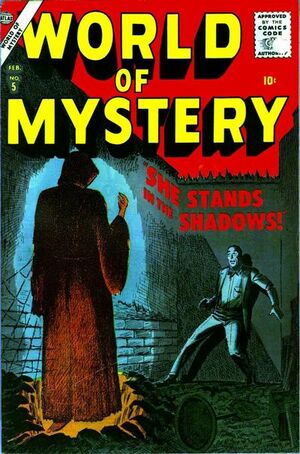 Appearing in "She Stands in the Shadows"Edit

Synopsis for "She Stands in the Shadows"Edit

A prisoner has a dream that a beautiful girl he has never met is waiting for him to be released so they can be married. He has an even stranger dream, that he has escaped his cell in order to rescue her from being struck by a truck, but discounts the whole experience until she shows up in the visitors room to see him.

A rich man has a recurring nightmare of those he cheated seeking revenge which leads him to fear falling asleep at first, but then he realizes that he can always escape retribution by waking and feels less fearful. He is unaware this evening the butler has put a sleeping pill in his tea as suggested by the doctor.

Appearing in "The Thing in the Bottle"Edit

Synopsis for "The Thing in the Bottle"Edit

A man asks a potential employer for a job so that he can marry his sweetheart, but the employer wants to hire someone with more experience. A bottle washes up on the beach that contains a hostile genie. The man fast talks the genie into returning into the bottle so that it will not be harmed by modern weapons, and the employer is impressed enough with his grace under pressure to offer him the job.

Appearing in "The Bottomless Box!"Edit

Synopsis for "The Bottomless Box!"Edit

Detective Joe Flemming is out looking for salvage at an atomic testing ground when he discovers two irradiated boxes that are somehow linked to one another. Anything tossed into one shows up in the other. He decides to use these two boxes to nab a jewel theft ring so he gets the store owner to put his jewels in one box while he keeps the other with him. When the thieves attempt to rob the store, the owner takes them to the box and they discover that things which fall into it disappear, so they enter the box figuring the jewels may be at the other side. They find Joe waiting for them, so he arrests them and hands them over to the police.

Appearing in "Human for a Day!"Edit

Synopsis for "Human for a Day!"Edit

The king of the underworld sends up two spies to the surface world in preparation for an invasion, but they both betray him and wish to conquer the surface world themselves. They battle amongst each other and both die. When the king hears from neither of them, he gives up his ambitions of conquest.

Appearing in "The Voice from Nowhere"Edit

Synopsis for "The Voice from Nowhere"Edit

A farmer misdials a phone number and hears a voice predicting that he will find money in a dry well. He does, so he sends five dollars to an address that he was given in order to receive more phone call predictions. He gets a call telling him that he will fall in love with a beautiful girl and he does. He gets a call warning him of bad men which will seek to take away his money. The crooks show up and tell him that they stole the money from a bank and hid it in the well and that the girl was part of the setup. This makes the farmer angry at the phone caller for telling him he was going to fall in love, so after the police nab the crooks, he tells them to go to the address he sent the five dollars to as well. There is no one there and the phone line is disconnected.

Retrieved from "https://heykidscomics.fandom.com/wiki/World_of_Mystery_Vol_1_5?oldid=1473091"
Community content is available under CC-BY-SA unless otherwise noted.