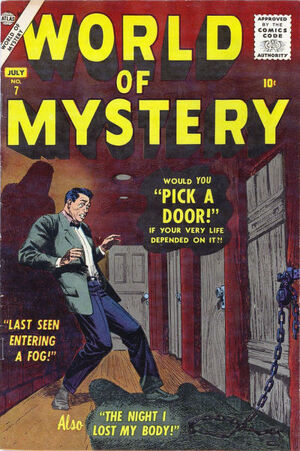 Appearing in "Pick A Door!"Edit

Synopsis for "Pick A Door!"Edit

A robber gets a shock when breaking into a jewelry store alarm system and finds himself in limbo surrounded by four doors labeled guilt, conscience, remorse and punishment. A solitary figure dressed in a green robe tells him if he ever wants to escape from the cave, he must choose to enter a door. He picks guilt but he finds himself right back with the green figure who tells him to choose another door. He goes through the next two, each worse than the last, but hesitates before punishment. Not wishing to remain in the cave, he enters the door and after enduring punishment for some time finds himself back outside the jewelry store. He resolves never to commit a crime again.

Appearing in "The Night I Lost My Body!"Edit

Synopsis for "The Night I Lost My Body!"Edit

A criminal volunteers for a brain transplant experiment in order to avoid the police in his new body, unbeknownst to him the scientist places his brain in the body of a gorilla.

Appearing in "Obey or Die!"Edit

Synopsis for "Obey or Die!"Edit

A radio engineer finds that he can broadcast commands into the minds of those around him. He uses this ability to commit crimes. When the police pursue him to a hillside, he broadcasts a command to jump into the ravine, but the echo bounces off into his own mind and he ends up ordering himself to his death.

A small time crook sees a man press a stud on a box which emits a fog that he disappears into. He assumes the man belongs to a crooked gang that is well connected. When another comes along with a box, the crook jumps him and enters the fog, intending to sign up with the gang boss. He meets the leader, but is startled to find out they are from another dimension. The aliens turn the crook over to the police as a good will gesture.

Appearing in "The Raving Beauty!"Edit

Synopsis for "The Raving Beauty!"Edit

A man's vain wife threatens to leave him unless he can buy her a perfect mirror which shows that she does not age. He buys her a mirror that traps her inside of it.

Appearing in "The Man Who Wasn't Afraid!"Edit

Synopsis for "The Man Who Wasn't Afraid!"Edit

A man attempts to rob natives of their treasure, since they said it was guarded merely by a 'monkey', but what he finds in the cave is actually a very large angry gorilla.

Retrieved from "https://heykidscomics.fandom.com/wiki/World_of_Mystery_Vol_1_7?oldid=1473093"
Community content is available under CC-BY-SA unless otherwise noted.